The Snow Geese Are Back

Thousands and thousands of Snow Geese over-winter in Skagit (sounds like gadget) Valley, which is about 25 miles south of us.  We've never seen them this early, but we are not sure if it is because we usually don't start looking for them until November, or if they really are early this year.

Yesterday promised to be gorgeous - forecast was for a high of 66 and sunshine - so we started out fairly early to enjoy the day.  We have to enjoy these bonus sunny days in the Pacific Northwest - rain may appear at any moment.  We stopped at Goodwill - I'm looking for some plastic canvas pattern books (more about that later and the treasures I found) and then on to drive through the farm country.  We stopped at a farm stand - and there, in the fields across the road - were hundreds of snow geese.  We could hear them before we saw them.  They were beautiful in the bright green fields. 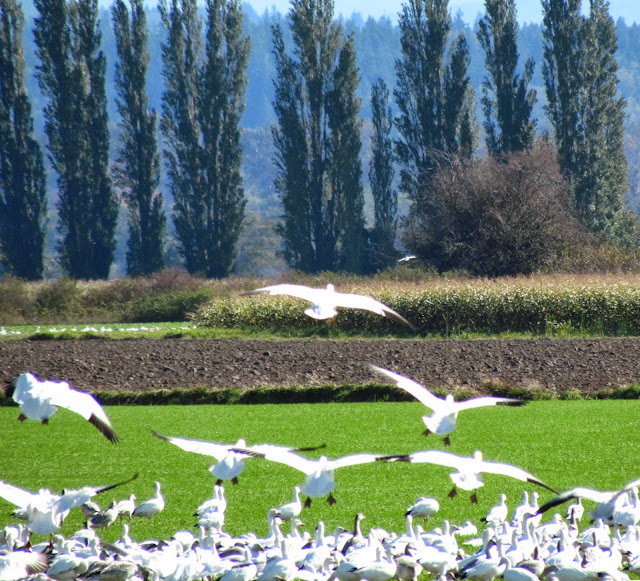 The Snow Geese breed  north of the timberline in Greenland, Canada, Alaska, and the northeastern tip of Siberia, and winter in warmer winter areas of North America from southwestern British Columbia to Washington - on Fir Island, and in the Skagit River delta and sometimes south of there.  Other sub species migrate to the British Isles, but not in the numbers like on the west coast of the US. 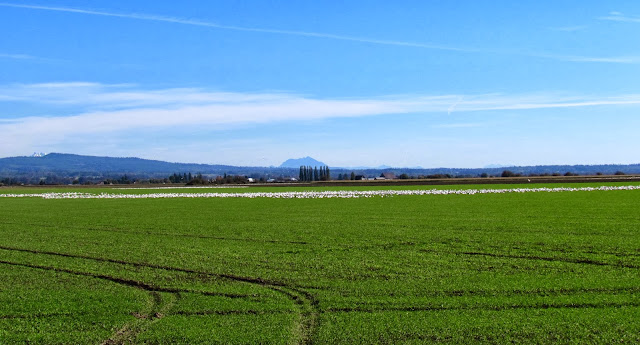 I couldn't get all the flock in, it was too wide for my camera.  This is the view from the road.  Behind this main flock - is a smaller flock just barely showing as a white line just before the trees - near the left side of the photo. 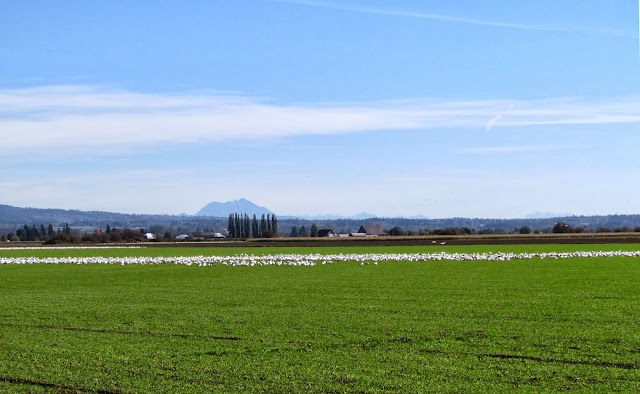 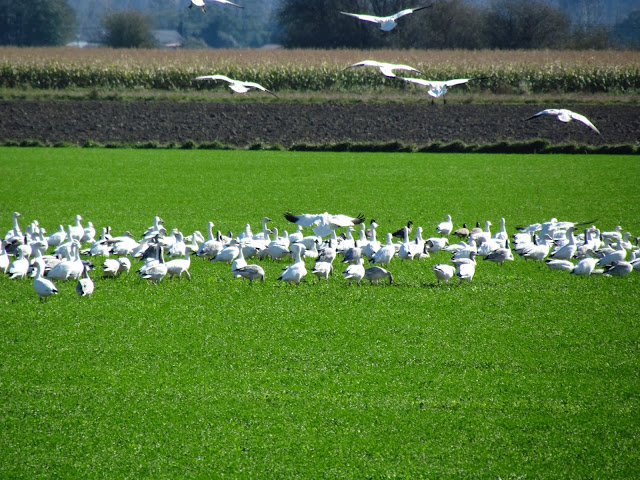 The flocks take off, swirl around and land again - never landing on top of another bird. 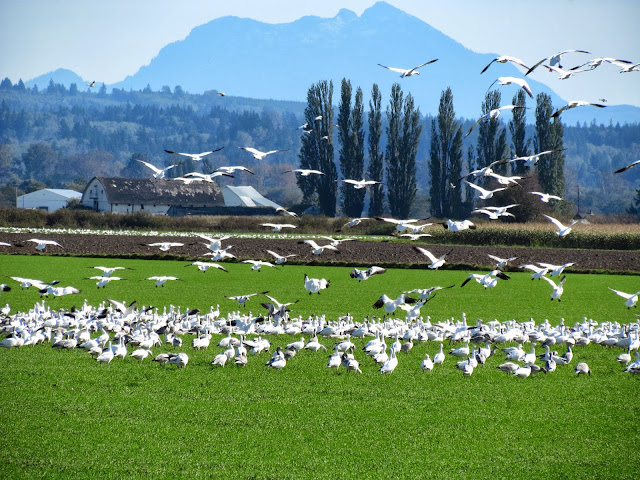 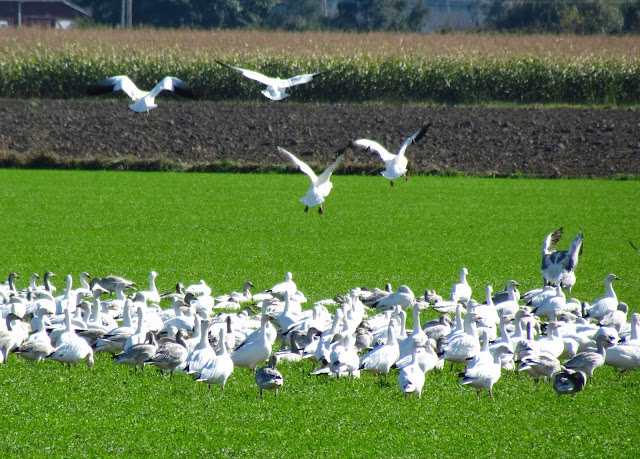 The black tips on their wings are beautiful in flight 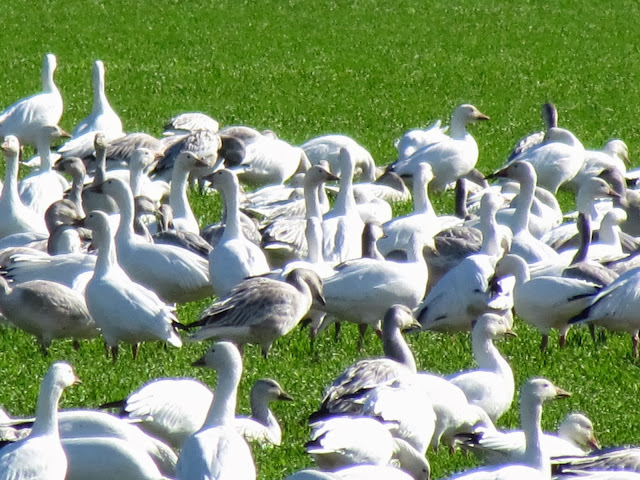 The gray Snow Geese are the juveniles 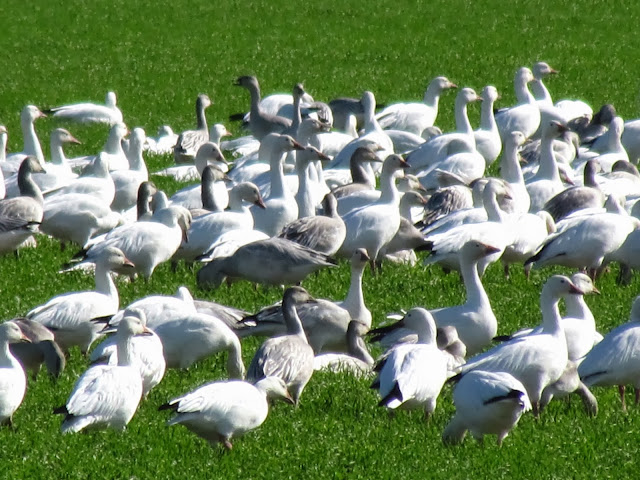 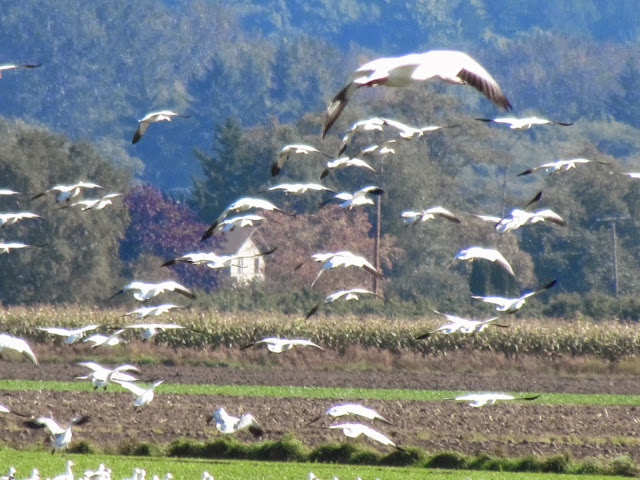 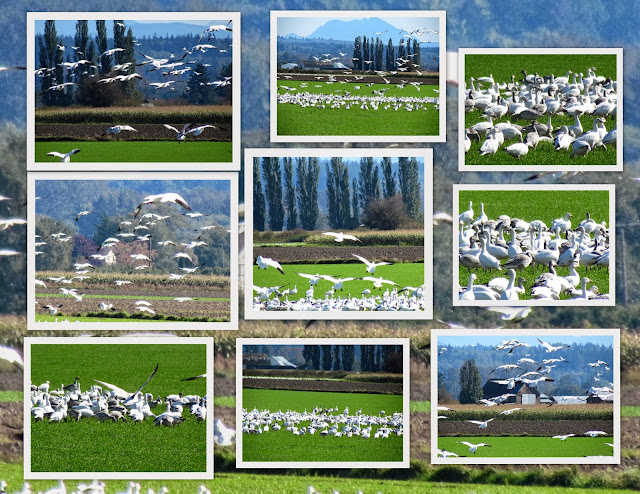 Gorgeous birds - we'll see more and more flocks come down from the cold north as the weather pushes them down here for food.  And then later the Trumpeter Swans will be arriving.

It's quite a sight, isn't it? I remember the first time - whizzing along the highway and wishing to stop. Thanks for sharing the photos, as I never did get any.

Beautiful images of snow geese. We saw them there a few years ago when we were visiting friends. A few stop by our island, but don't stay long. Such graceful creatures.

Oh my goodness, they are magnificent, as are your photos of them! :). Such a beautiful post, JoAnn! Thank you for sharing!

Joann, you lucky girl! You were certainly in the right place. Now I want to drive out to the country to see if we have any here in the Lower Mainland. Spectacular photos. :) Have you seen any starling murmurations? I've seen the odd one or two so far. Hope you have a lovely week.

There used to be a snow goose festival at a lake south of Edmonton but the geese don't stop there anymore. So that was the end of the festival too.

Wow, awesome seeing the large flocks of snow geese. They are so pretty, like a blanket of snow! Awesome photos, Thanks for sharing, I am looking forward to seeing some here. Enjoy your week ahead!

Beautiful!...the birds and the pictures, both! The shots with the multiple birds in flight remind me of a flock of origami cranes!

Japan has great winter visitors to and I always look forward to their arrival. For scouts that have to identify ten animals in the wild, a trip to a local pond is perfect.

A great series of photos. Amazing to see that many birds all together. The white birds against the green grass look so beautiful.

Beautiful! That's a lot of geese!

you really are privileged to have Snow geese in such numbers and so close..... a little green with envy from here in the UK

What a wonderful sight. Great photos.

I've read about this birds - its a sight I'd early like to see.