This has been a summer of birds.  We've never seen Pelicans here before (doesn't mean they haven't been here - we just haven't seen them).  So off we went to March Point (near Anacortes) and got some photos - though the Pelicans were far far out in the bay on a tiny island.  It was a thrill anyway. 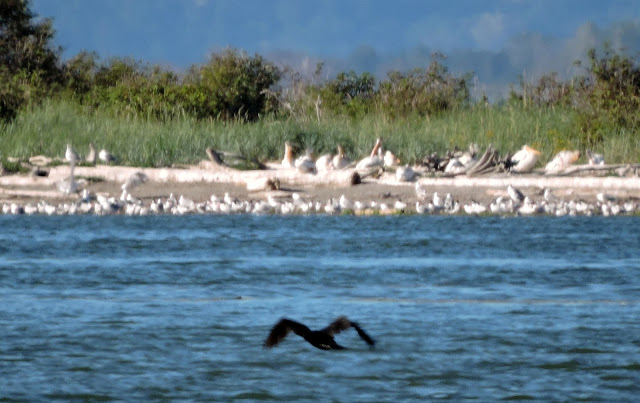 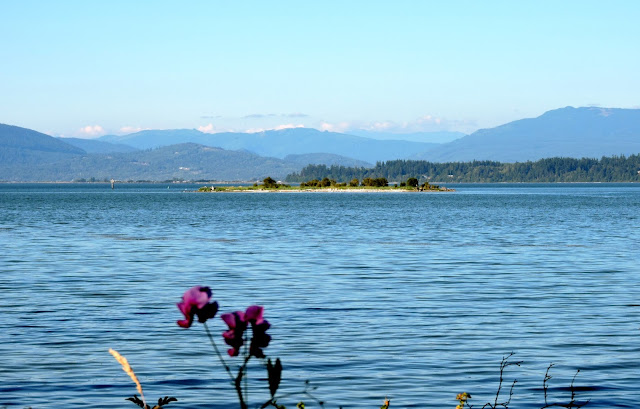 They are out on that island - this is without any zoom - so you get an idea of how far out they were. 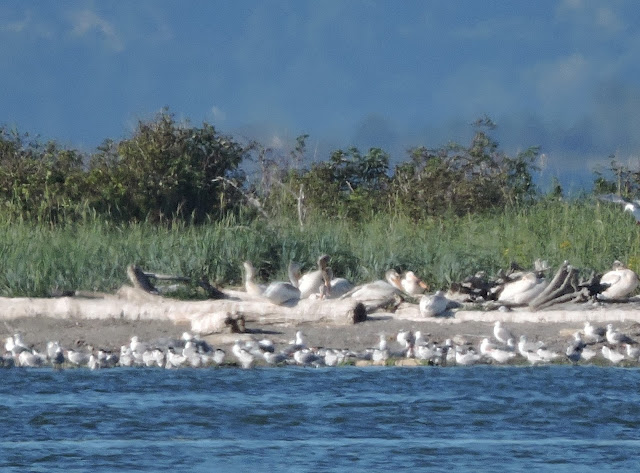 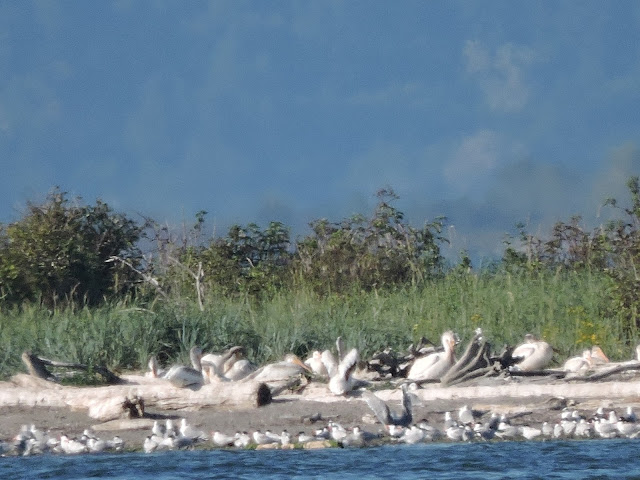 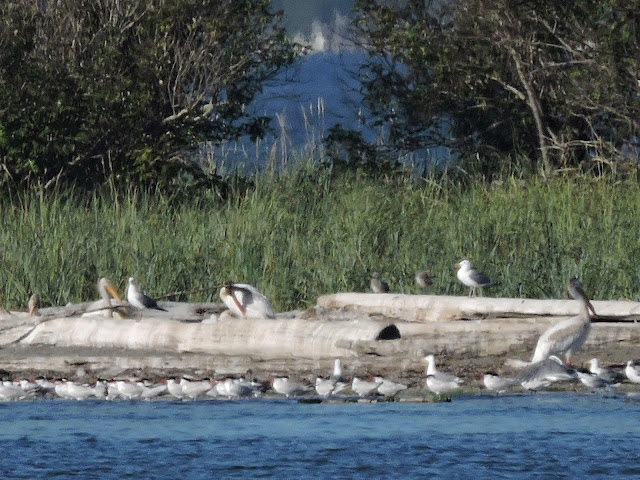 And some Caspian Terns too 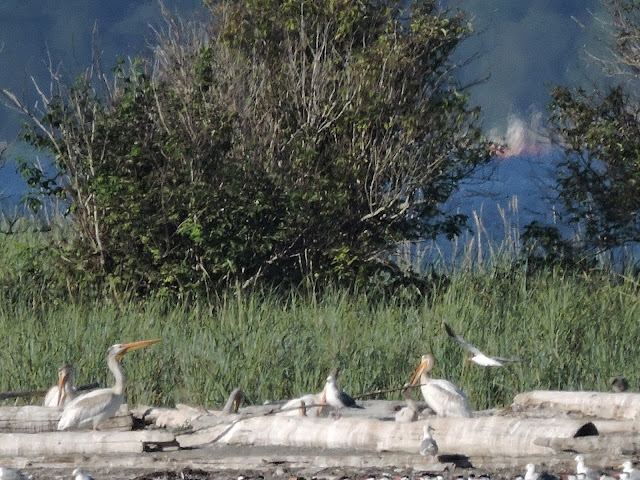 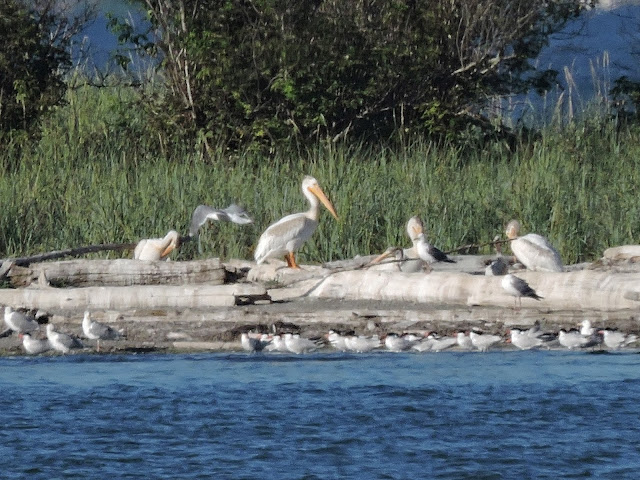 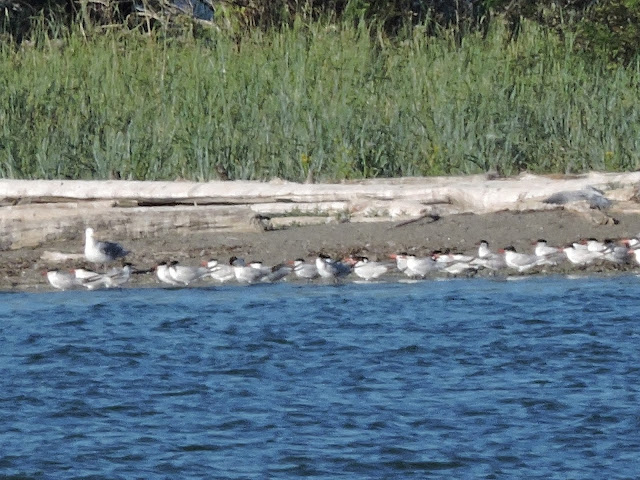 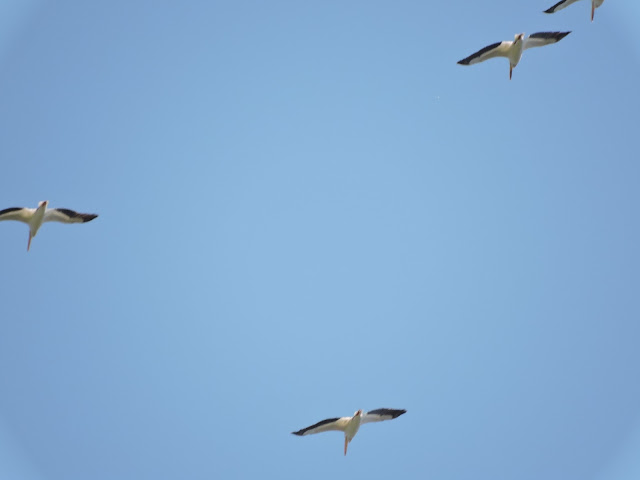 One day we were sitting on our deck in Bellingham and we saw some large birds flying over towards Lake Whatcom.  I rushed indoors to get my camera and this was all I captured of the flock of about 30.  I never thought to turn on the video - that would have been more fun - but at least I got these as they whirled around in a mass, all the time moving towards the lake.

Saturday's Critters
I'd Rather B Birdin'

Hello, great sighting of the White pelicans. The pelicans are one of my favorite birds. I like the Terns too. Great captures and congrats on your sighting. Thank you for linking up and sharing your post. Happy Saturday, enjoy your weekend!

Great shots of pelicans. So many of them.

Wow! Wonderful photos of the massive group of birds and the shots of the birds flying are awesome ~ thanks, ^_^

When we lived in Southern California and travelled to Mexico on trips we saw lots of pelicans. I loved watching them skimming over the surface of the sea. - Margy

I don't remember seeing pelicans on my trips years ago and was surprised 8 years ago to see them in Minnesota.
This summer I saw them in Colorado ... not a flock like you have posted, but maybe a family oe two. I wonder if some say we might see them over here in Japan....

What a beautiful lake and environs! Lovely shots of it and the birds. So great you got photos of them!

Wow...awesome in every way. Seems the gulls follow the pelicans (I see that too here)

Thanks so much for coming by I'd Rather B Birdin' & linking in!

Know exactly how you felt seeing those pelicans. I remember the summer when I saw a huge herd (?) like yours here on our lake here in Oregon -- Thought I was hallucinating about Florida at first.

You sound so much like me--going to see new arrivals, clicking away with hopes of getting a good shot and, also, forgetting that the camera has a video setting! Lovely photos.