It's been a BUSY week - Don was in the hospital since Sunday - mysteriously sick and then our great team of doctors (6 in all) worked their magic and figured out the problem.  While it is a serious problem it is easily fixed over time and he is now home - sitting across the room from me, reading his kindle (as life should be).

In celebration I thought I'd show you some of the pretty flowers that are blooming right now. 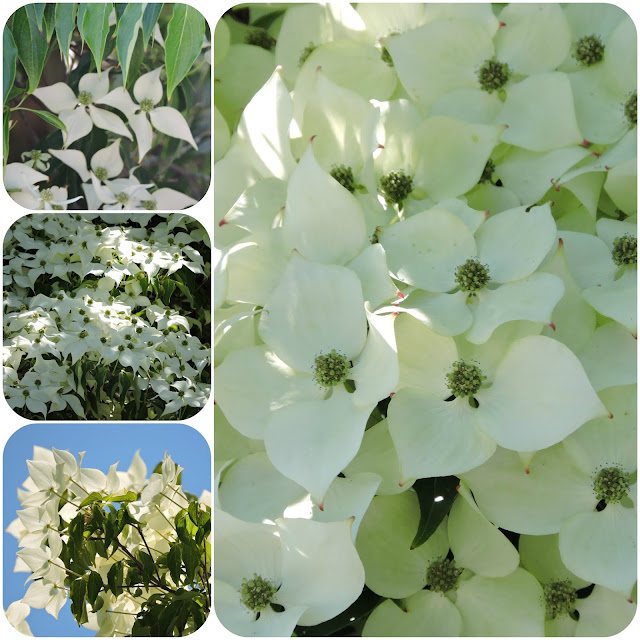 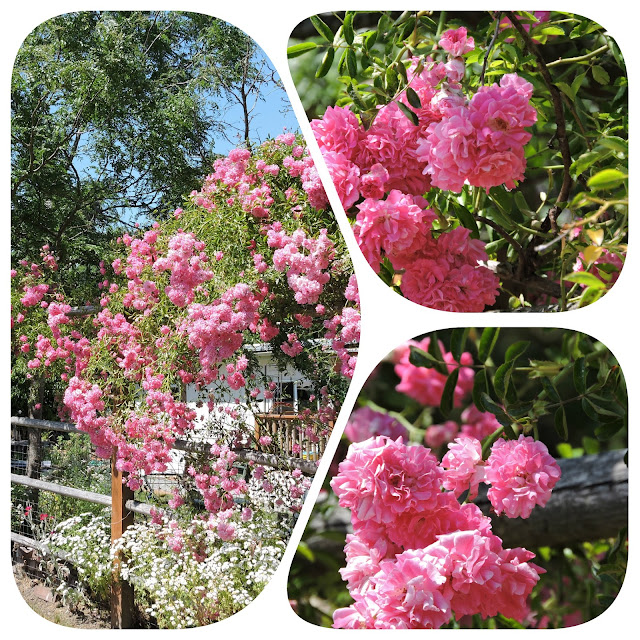 Roses along a fence in a small town named Lyman - not far from here - spectacular! 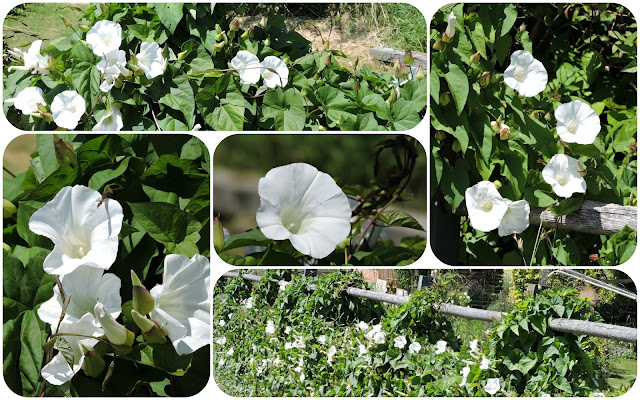 Many find the wild Morning Glories to be a pest - unless you can use them decoratively like along this fence, also in Lyman - very clever. 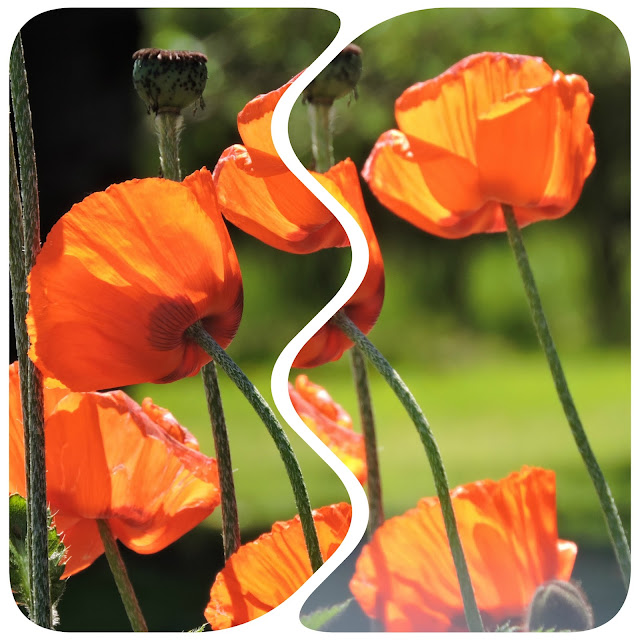 Poppies are beginning to bloom 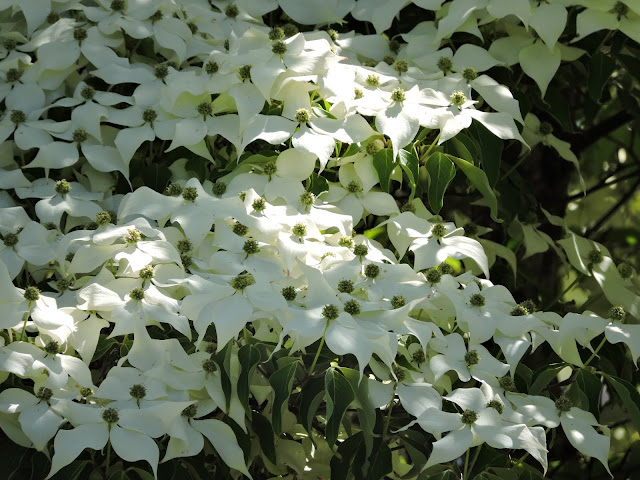 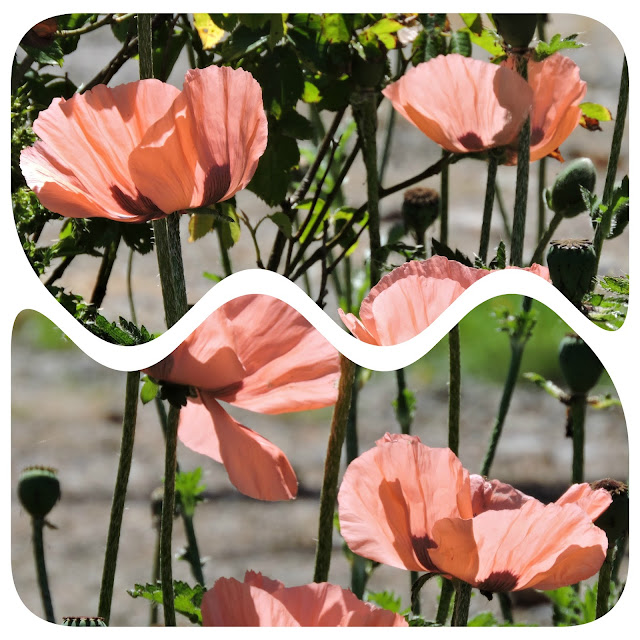 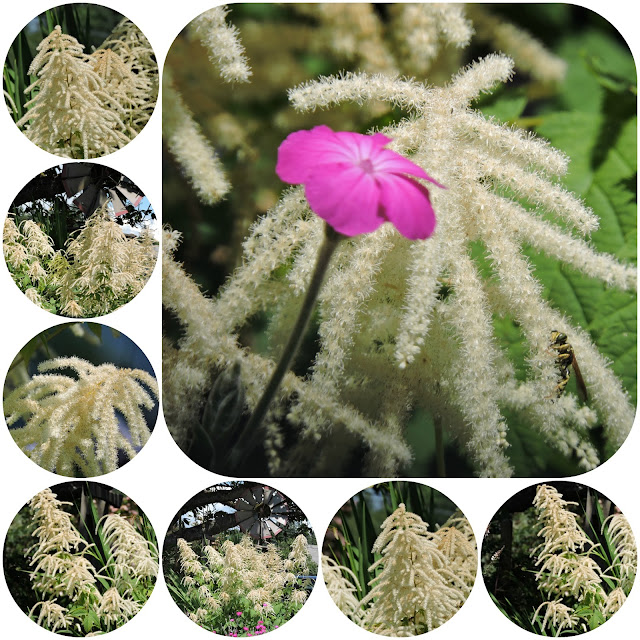 What is this?????  I've seen it growing wild along some roads but this was the first time I saw it in a garden - do you know what it is, besides wonderful? 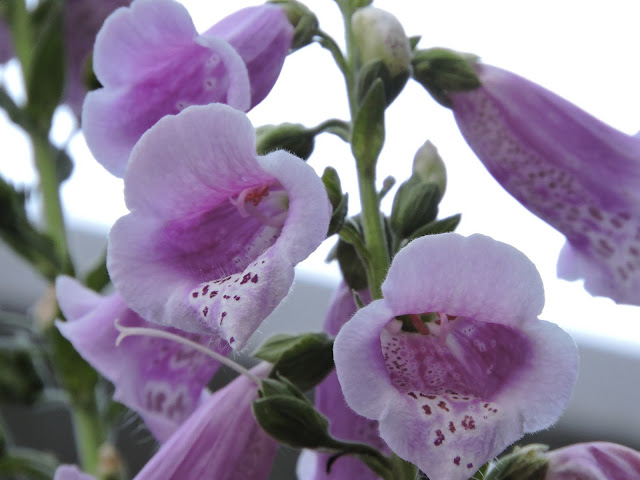 And Foxgloves everywhere - in yards and alongside the roads and covering hillsides - and on my deck in pots. 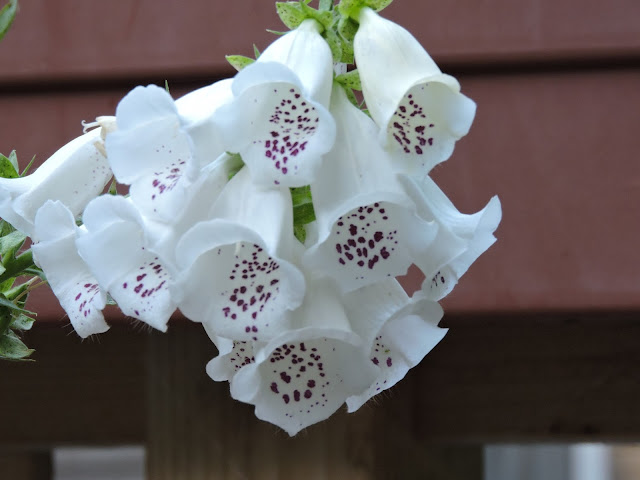 The legend is that the fairies would come out at night and use the flowers for their gloves at the fancy moonlight balls - and the flowers were called "Wee Folk's Gloves" - and soon became shortened to Foxgloves.

Mosaic Monday
Posted by JoAnn ( Scene Through My Eyes) at 5:42 PM

These are beautiful - the dogwood, in particular, are perfect!
I hope Don is mending quickly. It sounds like you had a scary time there and I'm glad the doctors were able to come up with a diagnosis. I've seen a few too many shrugged shoulders in my time.

I wish we could grow the dogwoods with these blooms, they're gorgeous. Lots of pretty flowers and the unknown looks like Aruncus - goat's beard.

I was just going to say what Judith already mentioned---Aruncus--Goats Beard. It grows everywhere doesn't it.
Beautiful flowers you captured.
MB

I'm sorry to hear that Don isn't well but glad that the doctors have a diagnosis and can treat it. The flowers are beautiful, I was thinking goat's beard for your mystery one as well.

Good morning, I am glad you Don is OK. I love all the pretty blooms and flowers. I The dogwoods and the poppies are my favorites. Have a happy day!

What a beautiful time of year, your pictures are lovely. I never knew that about Foxgloves being called little folks' gloves - it makes perfect sense now. I had always imagined Foxes wearing them! Silly me, everyone knows foxes don't wear gloves!

I'm so glad Don is home and improving. I hope he can take it easy and rest this week and feel stronger soon. The dogwoods are just beautiful. Things are so hot here that we don't have as much blooming now. Summer came early. Enjoy your day! Hope you can rest some too! Sweet hugs to you both, Diane

I love foxgloves JoAnn - and those roses over the fence are exquisite.

Jo, I am So Sorry for your fright over Don's illness. Tell him he's not allowed to do that again!
Took a walk with Ray yesterday. Said if I had a sunny place, I'd plant clover and a little wildflower meadow with Queen Anne's Lace. I don't think I've ever seen a poppy here on the east coast. I wonder if they grow in this climate?
:) m & jb

What's interesting is that you think the flowers are "white" - but look closely and they are actually grey and yellow and many other tints, tones and shades! Beautiful!

Sorry to hear about the scare over Don's health and glad that he's home recovering.
Beautiful flowers - those dogwoods are the prettiest things, all creamy shades. The poppies are blooming here, too, wild beside the road.

I'm sorry to hear that your husband has been so ill but that the doctor's found out the cause and he's recovering now. Scary! The flowers are just gorgeous! I love the foxgloves.

Those look like Japanese dogwoods ... Yama hoshi or mountain stars.
Our foxgloves are yet to bloom and they are called Hotaru bukuro or Firefly bags.
Glad your husband got his issues sorted out. Have a great weekend with lots more pictures

Those look like Japanese dogwoods ... Yama hoshi or mountain stars.
Our foxgloves are yet to bloom and they are called Hotaru bukuro or Firefly bags.
Glad your husband got his issues sorted out. Have a great weekend with lots more pictures

Just catching up. So sorry to hear about Don. I hope that all will be well and that he will be fit again very soon. Take care, all good thoughts. xx