Celebrating All the Happy Holidays!

This is a wonderful time of year, and in some ways it makes me sad to see some harshness in a few people - claiming that they have the exclusive rights to the winter holiday celebrations. There are many, many Reasons for this Season - all around the world.

This is my all time favorite bumper sticker - it says so much - in just one word.
There are so many festivals at this time of the year - and so many good things to celebrate. These are in no particular order - just Reasons why we celebrate our love for each other. It is often said that if we didn't have a winter celebration we would make one up - to bring cheer to this time of the year. 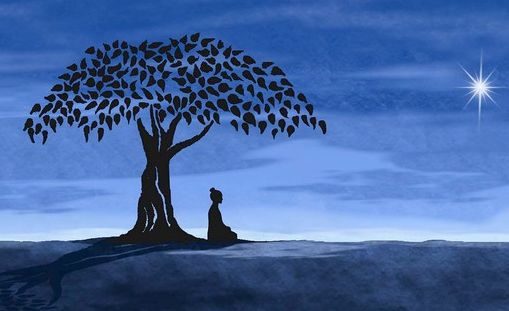 BODHI OR BODHI DAY
December 8 - Day of Enlightenment, celebrating the day that the historical Buddha (Siddhartha Guatama) experienced enlightenment. It was originally celebrated in Japan, China, Korea and Vietnam and now around the world, and is a day of meditation. 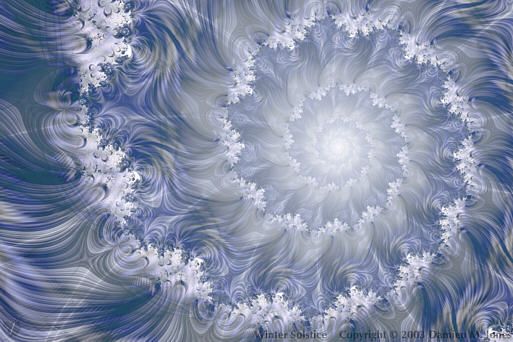 WINTER SOLSTICE - DECEMBER 21-22
The Solstice is celebrated around the world, with tributes to nature and giving of gifts to friends and loved ones. The main celebration centers around nature and this poem is a great tribute to the Winter Solstice.

The Shortest Day
And so the Shortest Day came and the year died
And everywhere down the centuries of the snow-white world
Came people singing, dancing,
To drive the dark away.
They lighted candles in the winter trees;
They hung their homes with evergreen;
They burned beseeching fires all night long
To keep the year alive.
And when the new year's sunshine blazed awake
They shouted, reveling.
Through all the frosty ages you can hear them
Echoing behind us - listen!
All the long echoes, sing the same delight,
This Shortest Day,
As promise wakens in the sleeping land:
They carol, feast, give thanks,
And dearly love their friends,
And hope for peace.
And now so do we, here, now,
This year and every year.
- Susan Cooper
Author of The Dark is Rising novels 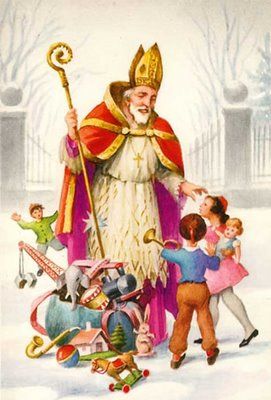 December 6 - though originating in Greece - this holiday is celebrated around the world now. It is celebrated in many ways—the bishop may lead a town parade, hold a Saints' Day Worship service, visit schools, hospitals and homes during parties or St. Nicholas might come at night and leave sweet treats and small gifts for children.

St. Nicholas is the Patron Saint of sailors, merchants, archers, thieves, students and children. St. Nicholas is the model for our modern Santa Claus and however he comes, Saint Nicholas reminds us that giving is more important than receiving, and doing for others is the faithful way to live. 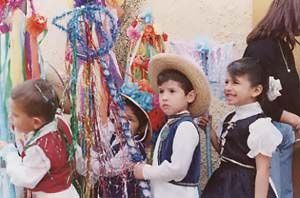 LAS POSADA
Christmas festivities in Mexico begin with Las Posadas, nine consecutive days of candleight processions and lively parties starting December 16.
Children gather each afternoon to reenact the holy family's quest for lodging in Bethlehem. The procession is headed by a small Virgin Mary often perched on a live burro, led by a little Joseph. There are other children - dressed in colorful costumes and carrying decorated walking sticks and paper lanterns. The children stop at a designated house and ask for lodging for the Holy Family - and are turned away, because there is no room at the inn (Posada), this is repeated at a second and then third home - the third home says there is room in the manger and then the children are invited in for fun and games, and the chance to take a whack at the pinata and a mad scramble for the fruits, sugar cane, peanuts and candies in the pinata.

Russian Christmas is celebrated on Jan 6. After the 1917 Revolution, Christmas was banned throughout Russia, along with other religious celebrations. It wasn't until 75 years later, in 1992, that the holiday was openly observed once again. Fasting is observed during the day and after the first star appears dinner is served - meatless but festive. The most important ingredient is a special porridge called kutya. It is made of wheatberries or other grains which symbolize hope and immortality, and honey and poppy seeds which ensure happiness, success, and untroubled rest. A ceremony involving the blessing of the home is frequently observed. The kutya is eaten from a common dish to symbolize unity. 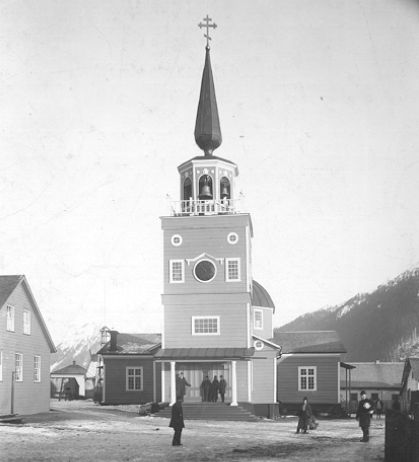 Growing up in Alaska we often would go to the Russian Christmas Mass at this wonderful Russian Orthodox Church. 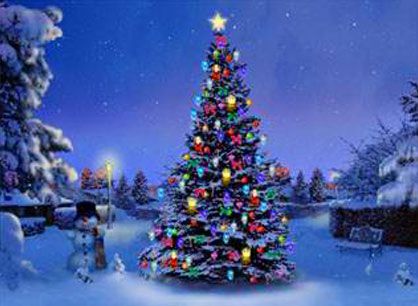 The christian holiday most widely celebrated - on Dec. 25, the day that the Solstice was originally held, according the the ancient Julian calendar. Solstice was incorporated into the church so it would fit their beliefs, something that happened in the church over the years with many pagan holidays.  It is a time of feasting, families gathering and gift giving - in the tradition of the Wise Men bringing gifts to the Christ Child. Gift giving is also a time when we can give to the less fortunate in our communities and around the world. 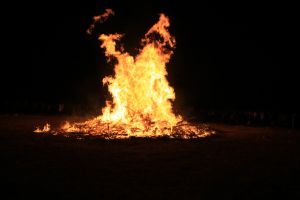 SADEH
An Iranian mid winter festival, celebrated Dec 11 or Jan 22 - depending on the region of the celebration, it was celebrated with grandeur and magnificence in ancient Iran. Today it is a festivity to honor fire and to defeat the forces of darkness, frost, and cold. The chief preparation is the gathering of wood, and everyone in the community is expected to contribute. When the fire was lit there was a blessing given for the whole community. 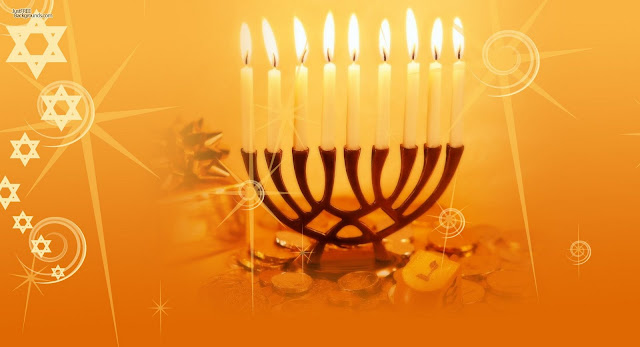 Chanukah
An eight day festival beginning usually in mid to  late December, commemorating the miracle of the oil after the desecration of the Temple by Antiochus IV Epiphanes, and his defeat in 165 BCE. The Menorah is one of the most widely recognized symbol of Chanukah. There is gift giving and feasting during this holiday - though not as lavish as Christmas, the focus is more on the spiritual events.

Too often we underestimate the power of a touch, a smile, a kind word, a listening ear, an honest compliment, or the smallest act of caring, all of which have the potential to turn a life around. 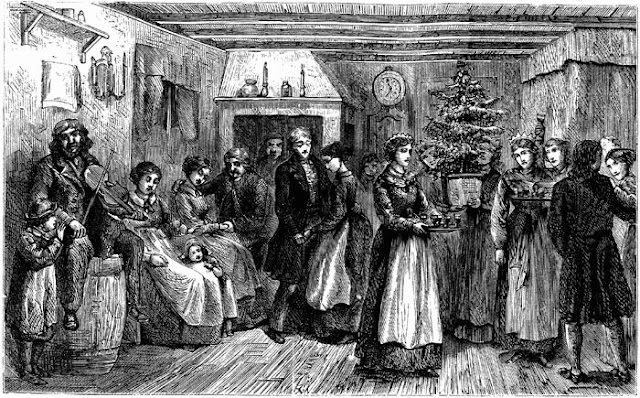 Begun as a Germanic and Egyptian Pagan festival of the rebirth of the Sun. It is now celebrated around the world, by Christians, non-Christians and even by the non-religious. Yule traditions include decorating a fir or spruce tree, burning a Yule log, hanging mistletoe and holly branches, giving gifts, and general celebration and merriment. 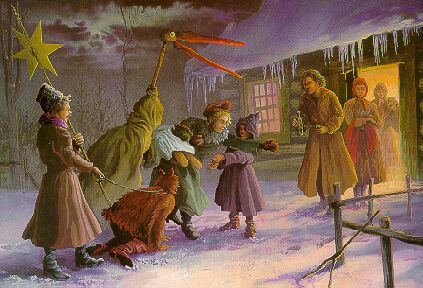 Celebrated in Balkan Slavic countries on the evening of Dec. 24, the meaning has shifted from Christmas itself to denoting the tradition of strolling, singing, and having fun on that special night. It specifically applies to children and teens who walk house to house greeting people, singing and sifting grain that denotes the best wishes and receiving candy and small money in return. 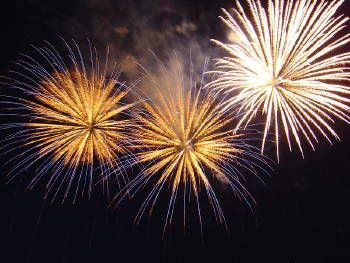 This is a Humanist holiday celebrated on December 23. Humanist philosophy is a progressive philosophy of life that, without theism (belief in a God) and other supernatural beliefs, it affirms our ability and responsibility to lead ethical lives of personal fulfillment that aspire to the greater good of humanity, doing and being good because it is simply the right thing to do.  It is a celebration of "a Humanist's vision of a good future." They celebrate a positive approach to the coming new year. Celebrating on Dec. 23 then allows the members to also join in other celebrations of the season.
Their philosophy is summed up in the words of a song that is often sung at Christmas - "Be Good for Goodness' Sake". 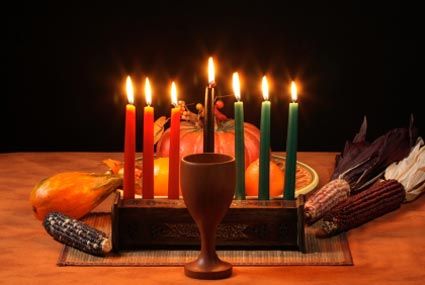 KWANZA
A week long celebration honoring universal African American heritage and culture, observed from December 26 to January 1 each year. It features activities such as lighting candles in a candle holder with seven candles and culminates in a feast and giving of gifts. It was first celebrated in 1966–1967.

There are many, many more celebrations of winter holidays - each with special meaning to those that celebrate their special days. Many Reasons to remember we are all connected and these are special times that we can remember those who are close to us, those who are far away and those who don't have the same good fortune that we have. We can celebrate any holiday by giving to the poor, helping at a soup kitchen, taking coffee to those standing in the cold while waiting at the food bank, bringing blankets and gloves to homeless and being tolerant of the beliefs of others.
Each person carries the ability in their heart to be open and accepting and my wish for this season is that we all share our commonality and not dredge up our differences. Try to get to know someone who is different than you - get to really know them personally and you will find they have the same desires, hopes, dreams and plans that you do. They cry in anguish, smile and laugh in joy and love their families the same way we love our families. We are one!

“Remember the five simple rules to be happy:
Free your heart from hatred.
Free your mind from worries.
Live simply.
Give more.
Expect less.”

Wonderful post. I love that Co-exist sticker. Thank you and celebrate which ever way you want to.
Peace
MB

What a wonderful post and one that so many need to read....and heed. I have not celebrated a 'traditional' Christmas since I was a kid and some people have felt sorry for me over the years. I like to spread a little cheer and have lots of fun but not get caught up in some of the traditions that others have. And I like everyone to do what they like and enjoy and what they need to have a Merry Christmas. I'll copy those 5 rules in my journal today and BE HAPPY! Holiday hugs my friend! I might play with dolls today...wish you were here!!!

Nice to be reminded of our diversity. Happy holidays to you and you loved ones!

Wonderful post.. I think everyone has a right to celebrate in anyway they prefer..And I love the COEXIST bumper sticker.. Happy Holidays to you and your family!

Solstice blessings to you and your family today!

I enjoyed your summary of so many celebrations - each one filling needs of the human heart. I agree with you. There's no reason to argue or compete - do what you enjoy to bring light and warmth to this time of year!