Sometimes This Happens At Birthday Parties

Our oldest daughter had a birthday this past week - she was 49.  We had a nice spaghetti dinner (her favorite birthday dinner since she was a little girl - we've had many wonderful years of spaghetti dinners, and she even cooked this dinner and brought it to our house) and I made cupcakes instead of a cake. But we still wanted to put candles on a cake and blow them out - so .  .  .

Ben and I put all 49 candles on one cupcake.  It went pretty well - we did it in secret so no one knew what we were doing until we brought out the cupcake - aflame with 49 candles.

Ben thought it looked like a bonfire.
After our daughter blew out the candles you could see that the heat of the flames had actually melted some of the candles.
I think next birthday it might be better to make a cake instead. 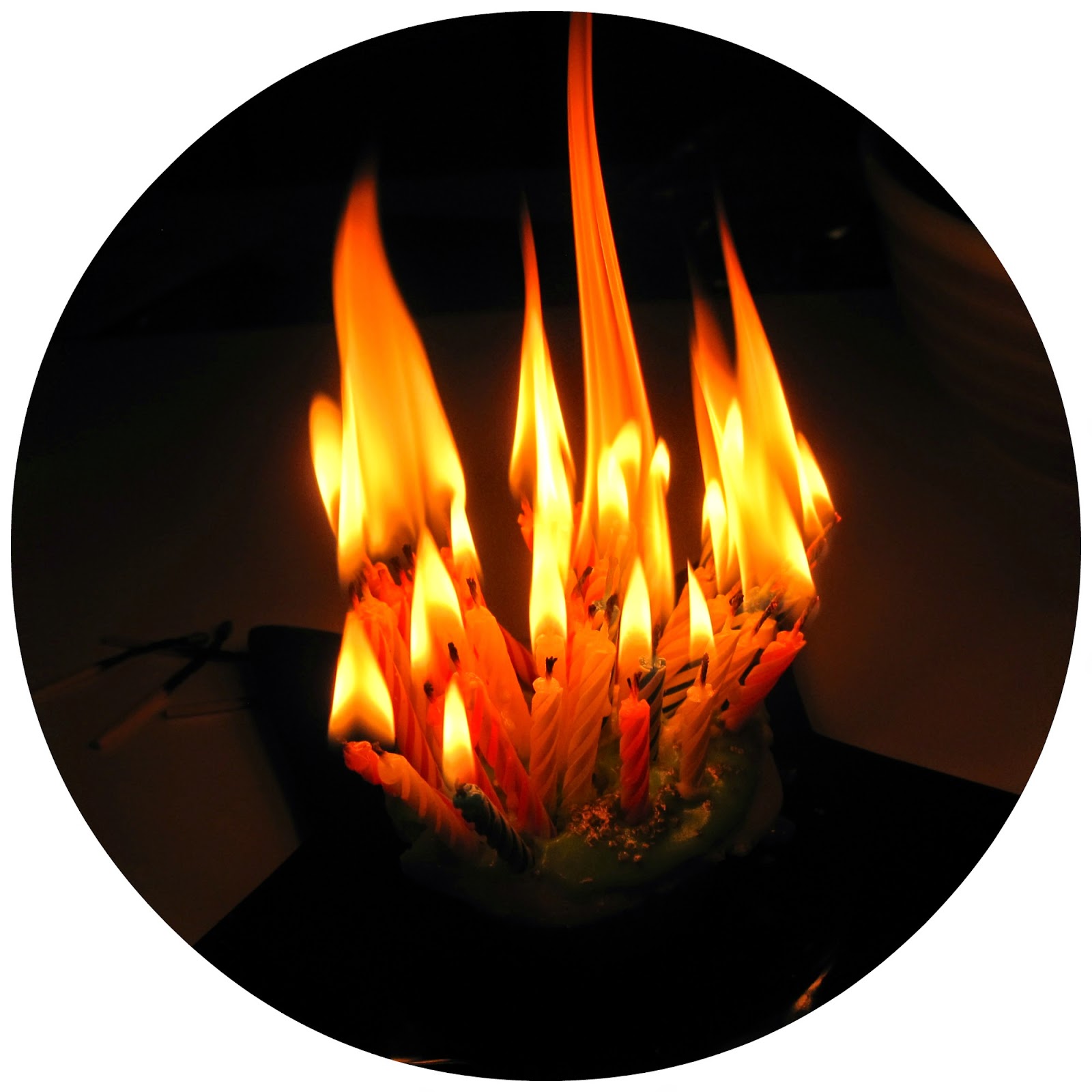 Happy Birthday!!!
Now to prepare for the next two birthdays - Ben's and our youngest daughter's - just a week apart.  Hmmm, maybe cake is a better idea.  And I need another box of candles.

Collages made with picmonkey.com
Posted by JoAnn ( Scene Through My Eyes) at 12:09 PM

Hahaha that is so cool! A cupcake and 49 candles it is indeed a bonfire hehe. Your post makes me smile!

This is wonderful! I've toyed with multiple candles on a cupcake from time to time but never attempted it. Great shots of your fun effort. Happy belated birthday to your daughter!

Oh my goodness! That's a scary birthday cake! Nowadays I just have one candle for each ten years of my age - it's safer that way! x

But what a beautiful glow it made. - Margy

Well, you could sing "You light up my life" instead of Happy Birthday... and yes, new candles are in order.. and maybe a slightly bigger cake..

How cute! I think it was a really fun idea! My 4 sons are all in their 40s now! Time sure flies! Happy Birthday to everyone in your sweet family! Hugs, Diane

LOL Never mind the birthday girl - there's something about fire and little boys that just clicks! I'll bet Ben was just delighted with his "bonfire!"
But seriously, what a great family time this is for you with the cluster of parties!

What a fun idea! That was one lit up cupcake! Lots of birthday celebrations to enjoy.

My daughter will be 40 in March. I wonder how a cupcake with 40 candles would do? Could set off the smoke detector, but what a fun way to celebrate.

Laughing out loud! So much fun!

Not much of the cupcake left after the candle fire. :-) I think a large cake will be in order for her big '50' next year.
Thanks for linking to Mosaic Monday JoAnn.

That must have quite a sight...49 candles in a cupcake! My son just turned 48 last month...does that make me feel old or what?
Love the photo of the swans.
Hope you are having a wonderful week, so far, JoAnn.

Oh how funny! I love the look of the melted cupcake...very cute!