The Snow Geese are back in NW Washington - by the thousands.  We saw four massive flocks on the ground down near Conway - this is just a small portion of one of the flocks. 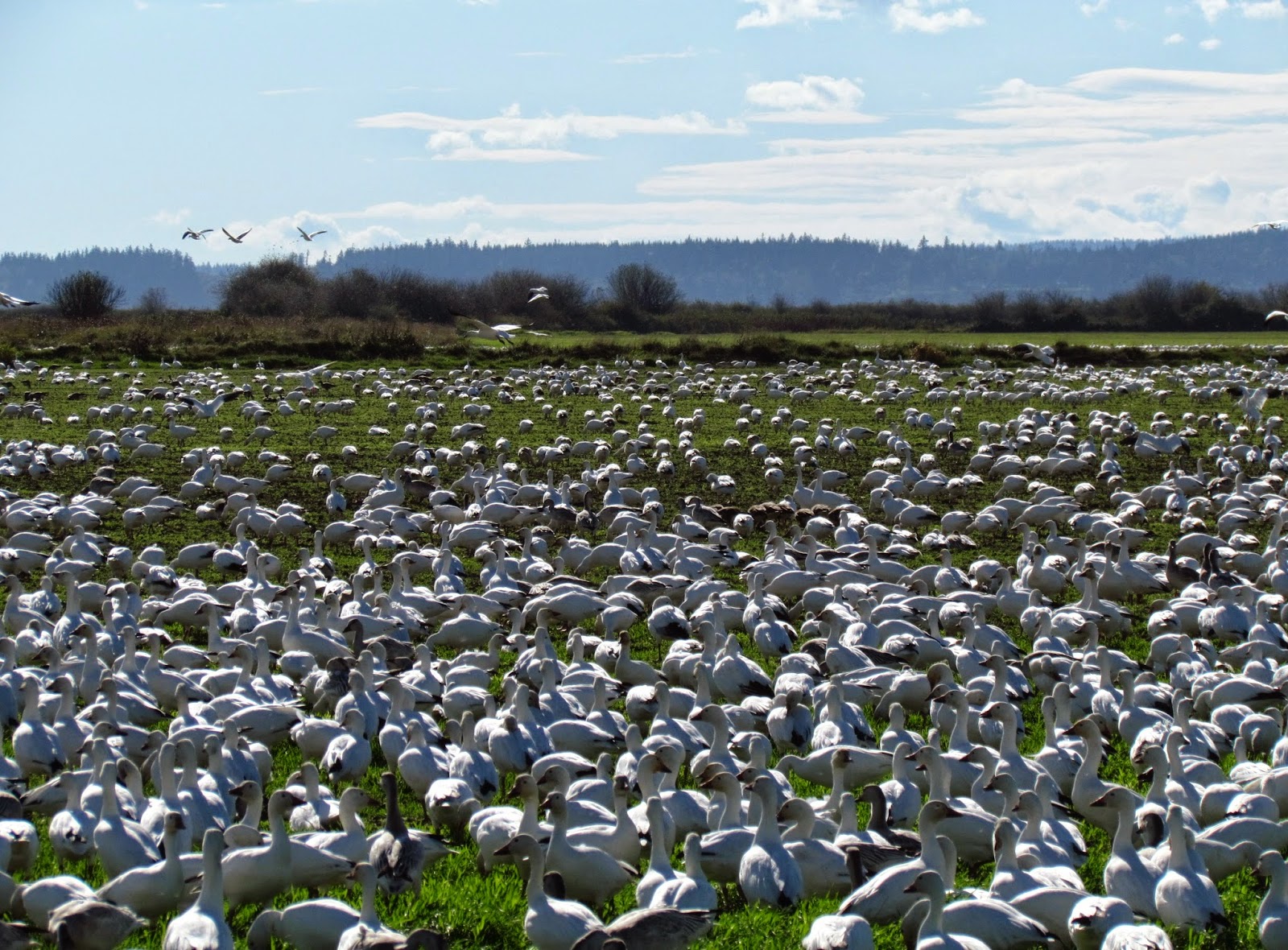 The sound of the flock is amazing


Snow Goose hunting in the eastern United States was stopped in 1916 because of low population levels.  Hunting was allowed again in 1975 after populations had recovered. Since then, their populations have continued to grow, to the point that some areas of tundra nesting habitat are starting to suffer. They are now the most abundant waterfowl on the continent.

Wingspan -54 inches (138 cm)
Weight - 3 1/2  lbs. - 7 1/4 lbs. (1600–3300 g)
The Snow Geese complete their annual migration in a week or less, stopping on the coasts of Alaska and Siberia along the way.  The information about their migration and movements is provided by satellite transmission tags, put in place on selected Snow Geese by the Department of Fish and Wildlife.
Most of the Snow Geese are seen on Fir Island. Fish and Wildlife manages the 225-acre Fir Island Farms Reserve specifically for snow geese on the island, where winter wheat crops are grown for the birds each year in partnership with a local farmer.  Fish and Wildlife purchased the property in 1995, but the birds have been using the area since at least the 1940s,

The birds move from Fir Island during the day to Skagit Bay at night, and some flocks even take  short trips north to Canada’s Fraser Delta or south to Monroe and back. 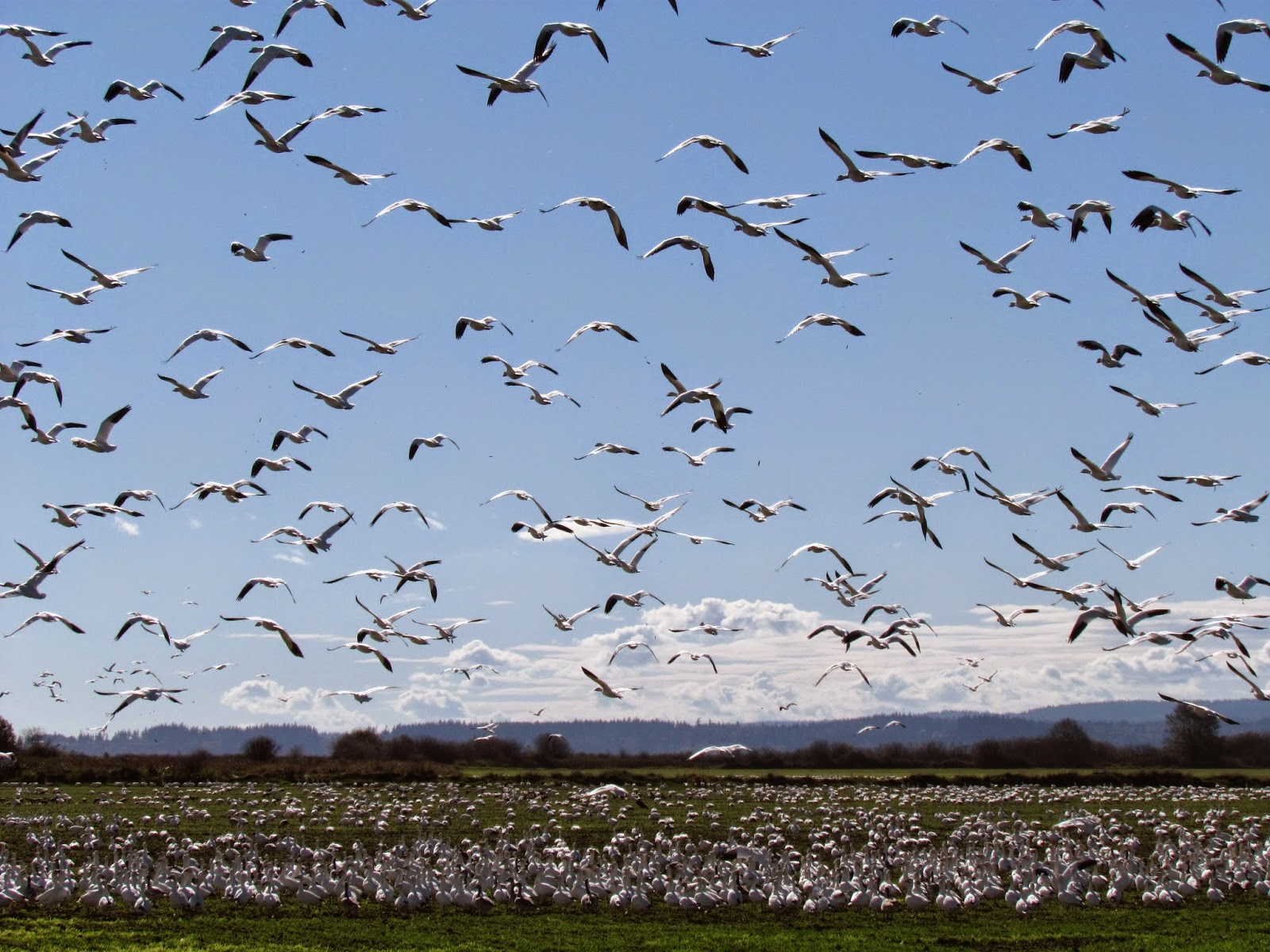 And when the flock, or parts of the flock take off - it is spell binding.  I often forget to take photos as I watch and listen.  It is like standing inside a snow globe.

Weekly Top Shot
Posted by JoAnn ( Scene Through My Eyes) at 8:35 AM

Great photos of the geese. There was a report on the local news recently saying that there'd been the largest ever numbers of pink-footed geese at a nearby nature reserve so geese seem to be doing well all over the world this year. Love the photos of the yellow house on your previous post too - I just love American architecture. x

Here in Alberta, Tofield used to be a big stopover for the snow geese as well. Then the lake or marsh dried up and they don't stop anymore. Too bad.

Very interesting, Shame on me, the only thing I can think of right now is the droppings. LOL!

It is cool seeing the large flocks of Snow geese. Their sounds are so loud! Great post and images.. Enjoy your new week!

This is the pure majesty of nature at its best! So much beauty in so much quantity with the thundering sound of a mass take off as a bonus. Wow. I often wish I were there with you on your photos shoots, but this is the one I envy most!

Thanks for the great information, in addition to the beautiful shots. All I've seen here are smaller flocks, perhaps a few dozen. This show in the Skagit Valley must be truly amazing.