Today is Don's birthday - so thought I'd share 5 random things about him.  We met 50 years ago next month- isn't that amazing?  He was 19 and I was 17.  He had just moved to Alaska from Wisconsin to work at the new pulp mill to earn money to go back to college.  The wages were a lot higher in Alaska - almost 4 times as much as in Wisconsin. 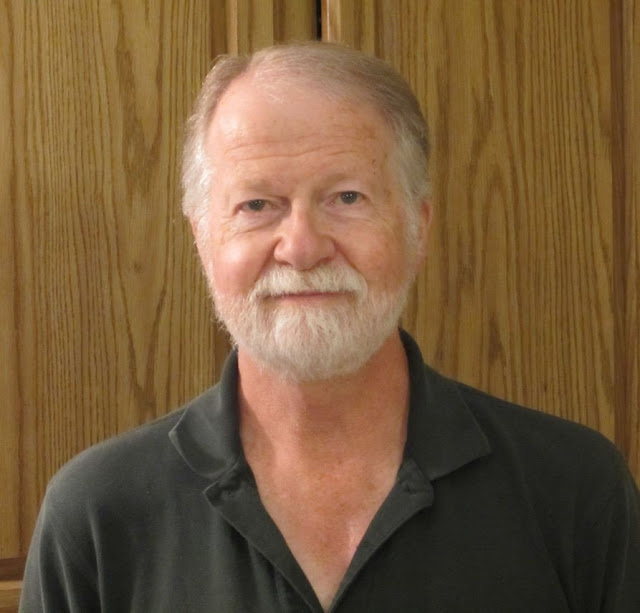 He's a strong man, a good man, honest and true. 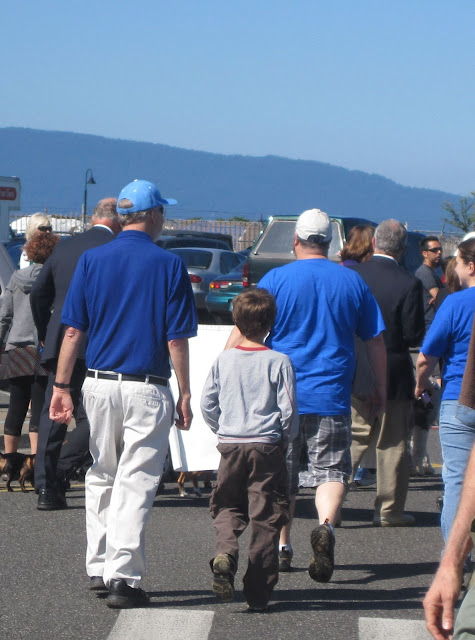 Just over three years ago he had open heart surgery to repair the Mitral Valve, damaged from birth ( 7 1/2 hour surgery).  One year later, to the day, he was in a 5K walk/run, along with our grandson Jahn-Zyel and several co-workers (they all wore blue shirts).   (Don, blue hat, Jahn, little guy  next to him).  He finished the race and then the next year he did it again and came in third - only beat out by two 30 year old women. 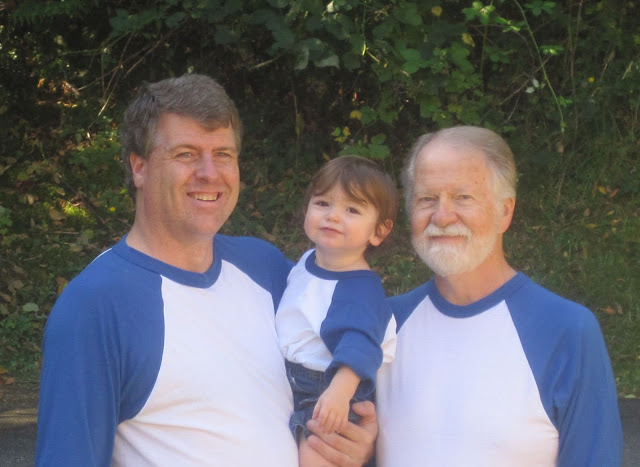 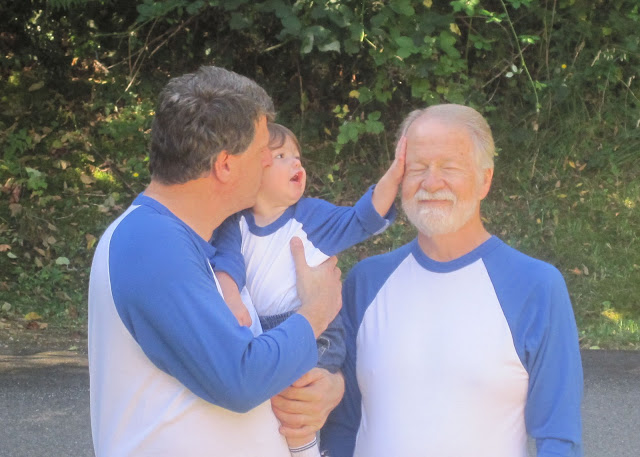 And his family loves him! 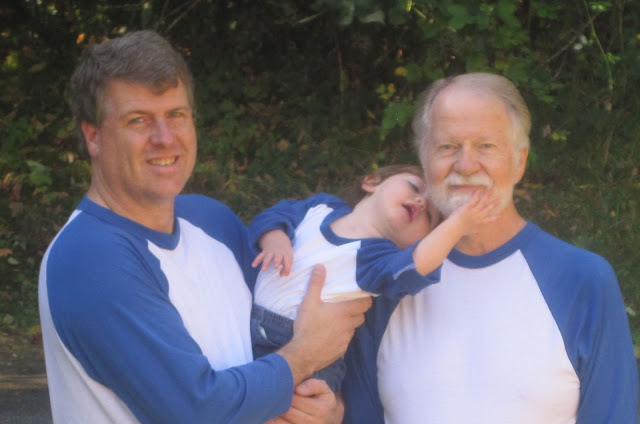 Awww Dadoo I love you!! 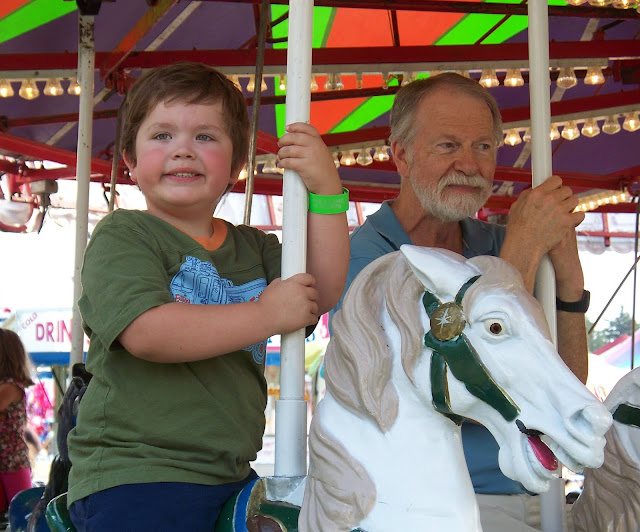 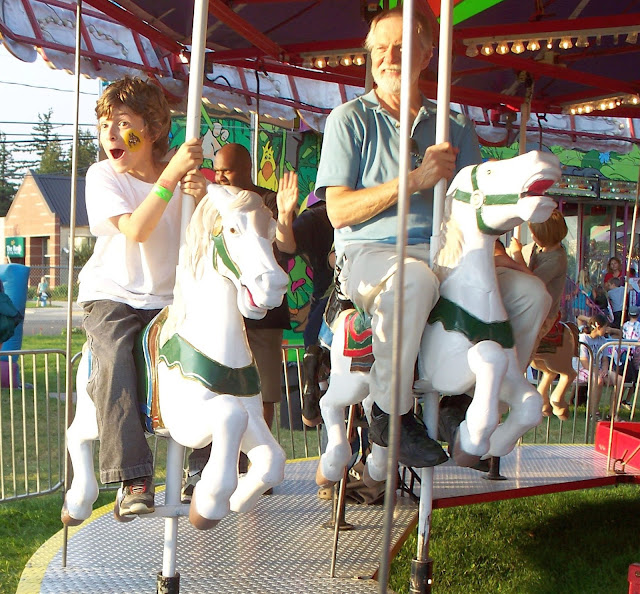 And Jahn-Zyel - at the NW WA Fair a couple years ago.
He is my life!

So glad he made such a great recovery and has gone on to do so much with those handsome boys.

JoAnn, please wish Don the happiest birthday ever, and here's to the many more ahead. Aren't we lucky to have the world's two best!!!!!

all your photos are wonderful but I do love the first one of the three Don's- and a big Happy Birthday wish from France to Don..such a sweet love story.

Lovely tribute to a dear, good man. I can tell that just by looking at his picture! The ones with the adoring looks of his grandson are priceless!

What a wonderful tribute to a special guy! Love those sweet pics! Such a beautiful family. Happy Birthday to your good man. xo

Happy birthday, Don, and many more! He has a warm, sweet face - no wonder you've been together so long. I love reading the story of your life together and seeing it in pictures. That surgery sounds scary; thankfully, it was a bump in the road that's now in the rear view mirror.

Happy Birthday Don, a fellow Virgo! It sounds as though the surgery has given him a whole new lease of life. Well done! xx

Happy Birthday to Don!! You are a lucky lady!

Love the photo where his grandson is touching him and he closed his eyes to enjoy the moment.

I see a lot more to celebrate than just a birthday.

Happy Birthday to Don. How wonderful to have such a loving, caring, compassionate man to celebrate. You are both the 'lucky' ones!

oh what a sweet post and happy birthday to don!

A lovely tribute to a lovely man JoAnn.

Happy birthday to your Donnie! I love the photos of the three generations of Donnies. Great shots! Have a happy weekend!

Grandma Barb's This and That said...

Happy Birthday to your special man! I love the photos of the 3 Donnies!

This is wonderful, JoAnn! One of the best posts ever. I mean it. :). A beautiful tribute to a great, loving husband.

Your family's love for each other shines through! Enjoy every moment you get to spend with your Donnie!

Happy Belated Birthday MR Don I hope you had a pawsome day, and what fantastic pictures.

Thank you for joining in with Smile it's Friday.

Have a pawsome weekend xxxx