The Trumpeter Swans are back  - by the thousands.  In all the years we've lived here we've never seen such big flocks - or such a large number of flocks.  Usually we see huge flocks of the Snow Geese - but the swans are often sparsely spread out over the fields - but not this year. 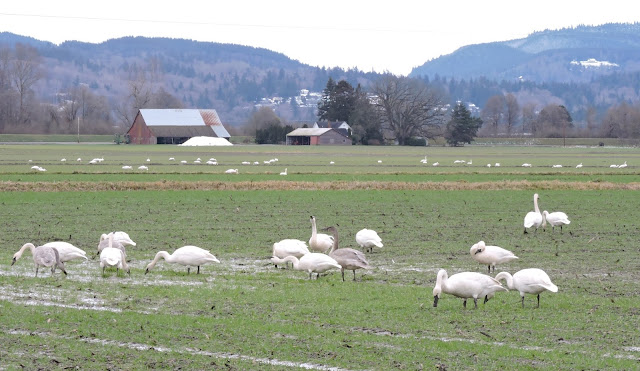 And so many were in front of barns - so I get to combine the two.  The grey swans are the juveniles.

Some of the barns are dwarfed by the flocks of swans - but they are there - back along the tree line. 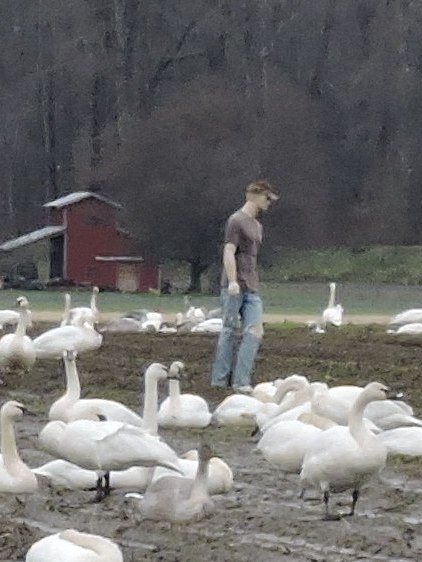 If you look to the left - up near the edge of the field in the previous photo you will see this man.  I didn't see him when I was taking photos - so I never did see if he moved or not.  I've enlarged and cropped the photo and still am not convinced as to whether he is a man or a decoy.  Whatever he is - he is not bothering the swans in the least - they don't seem to even notice him.  Parts of him look like a real person - but then there are other characteristics that look like a mannequin  - what do you think?  It sure was fun to discover him there in the photo - along with the barn.  One thing that makes me think he is not real is that it was windy and spitting snow and very cold that day, and he has no jacket. 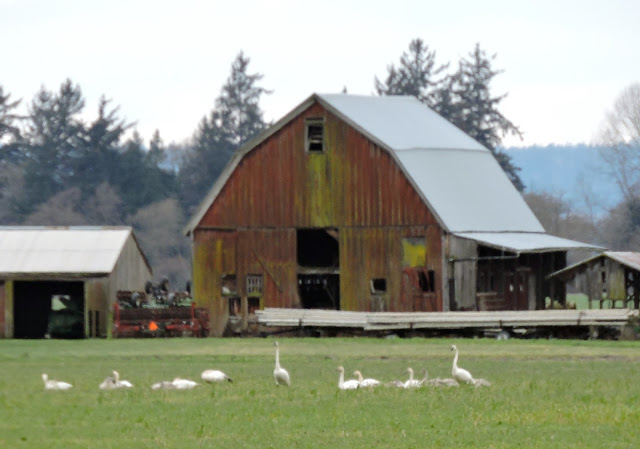 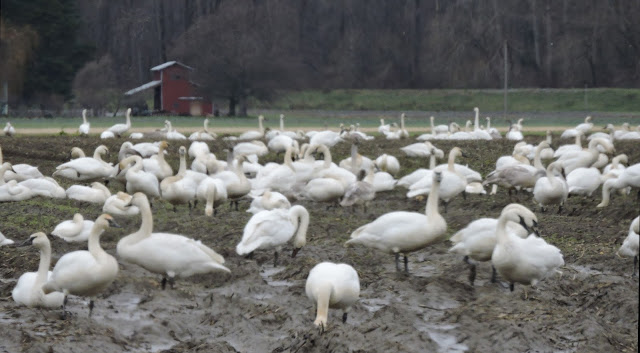 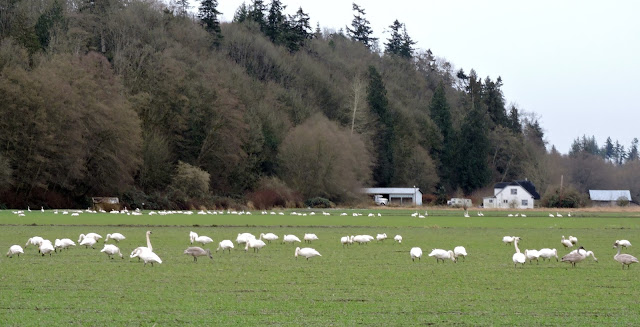 I've not posted much during December - so much going on - such festivities and fun and family and friends.  I enjoy blogging and hope to do more, now that the holidays are over - and I hope my followers will come back and join me now that they have more time also.

Happiest of New Years my friends!!!!

Hi Jo,
I vote Fake.
I love the soft grey of the juvenile swans.
We hope to do more blogging this year, too.
xo, m & jb

Yeah, probably fake ... because the swans show no reaction ... and if he had moved, you probably would have noticed. We do get swans wintering in Japan. Whooper swans and Tundra swans mostly but mostly in lakes and rivers and coasts. If they made it to Tokyo, it would not be in such large flocks.

Hello, WOW! It is cool seeing these large flocks of swans. They are beautiful. Posing with the barn is great for you and the barn meme. The man looks like a mannikin to me. Thank you for linking up your post. I wish you all the best in 2017, a Happy New Year!

Hi JoAnn, around here we see large flocks of Snow Geese in early spring, but I've never seen Trumpeter Swans. They look like a prettier version of our Canadian Geese. How about we make a trade! My vote in that the man is a mannequin. Thanks for stopping by and now that you have your feet on the ground please stop back again.

That's a lot of Swans! So many interesting things out there in the PNW.

I think you are right - I think he is probably a decoy.

Lovely swans! Enjoyed the different views. pretty sure that's a store manikin used as a scare-crow, or scare-swan, or whatever. :-)

What a fantastic view of all the lovely birds! So many all together! I think he's a fake but wonder if he's not quite doing his job!

Wow - I have never seen snow geese like that - had to be amazing to experience!

As for the man - I vote decoy - he is disproportionate - plus his skin looks strange, and you didn't see him moving, AND it was dusting snow. Decoy, yes.

I haven't blogged much either = sure do appreciate your visits.

We have more swans around here, too. Or last fall there were a lot more. Will see what happens this spring.

I think the dummy is a mannequin, too.

I say he's a mannequin. The field where our swans visit has 3 or 4 profiles of predators in typical scale and the swans ignore them entirely, as they do the "man" in your shots.
I love those swans. They're so beautiful!

Looks like they can make quite a mess of the farmer's field. If it is a "scare swan" it isn't doing much good. - Margy

He's got to be a fake! I love the attitude of the birds surrounding him: "You do your thing and we'll do ours!"
Happy New Year, JoAnn!