An afternoon spent in Birch Bay State Park - and an evening overlooking the harbor at Blaine.  As the tide went out the shorebirds came in - and I waited patiently until they were right below us - and I was rewarded with wonderful photos of them.  There were Killdeer and Semi-palmated Sandpipers. 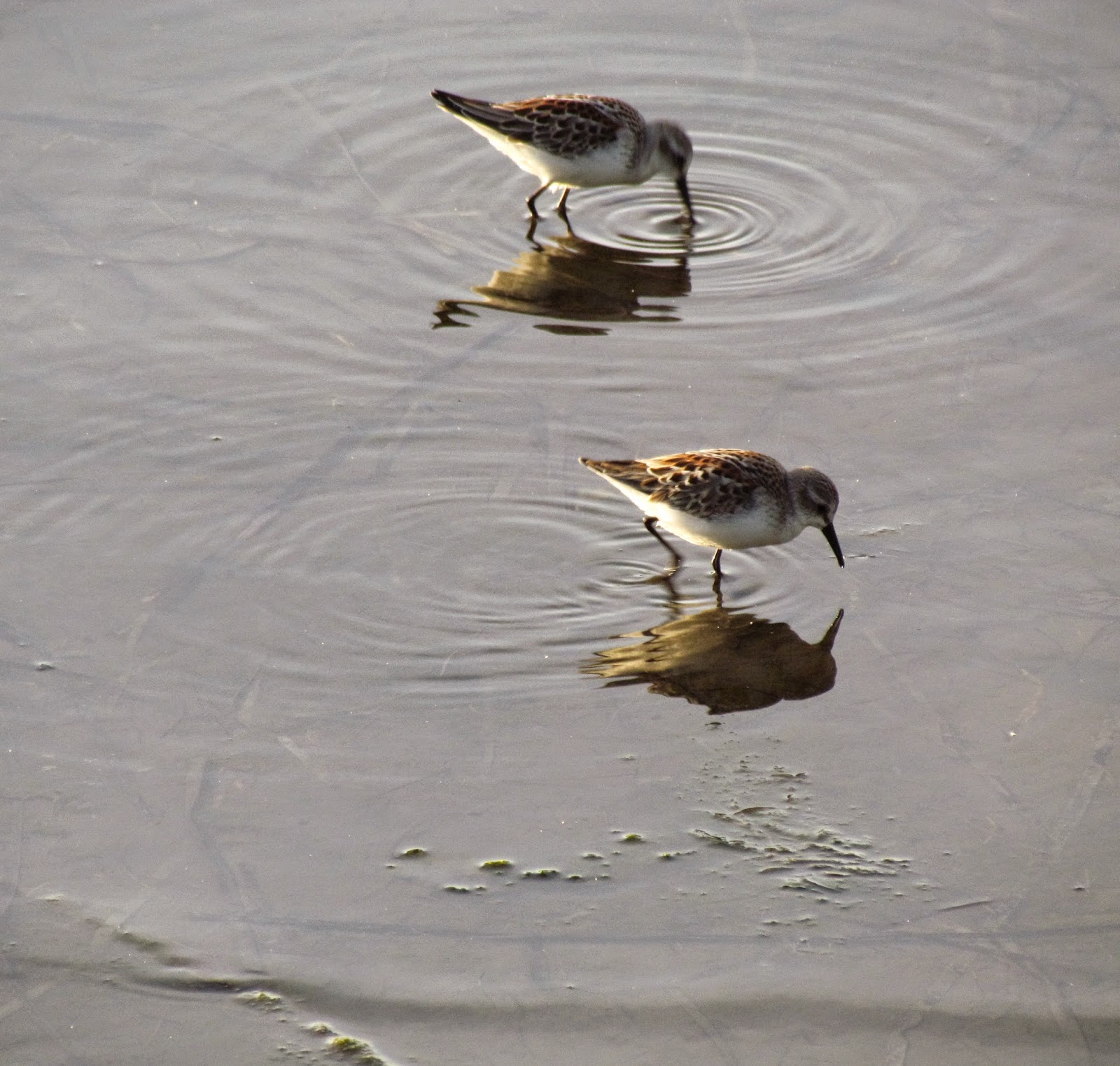 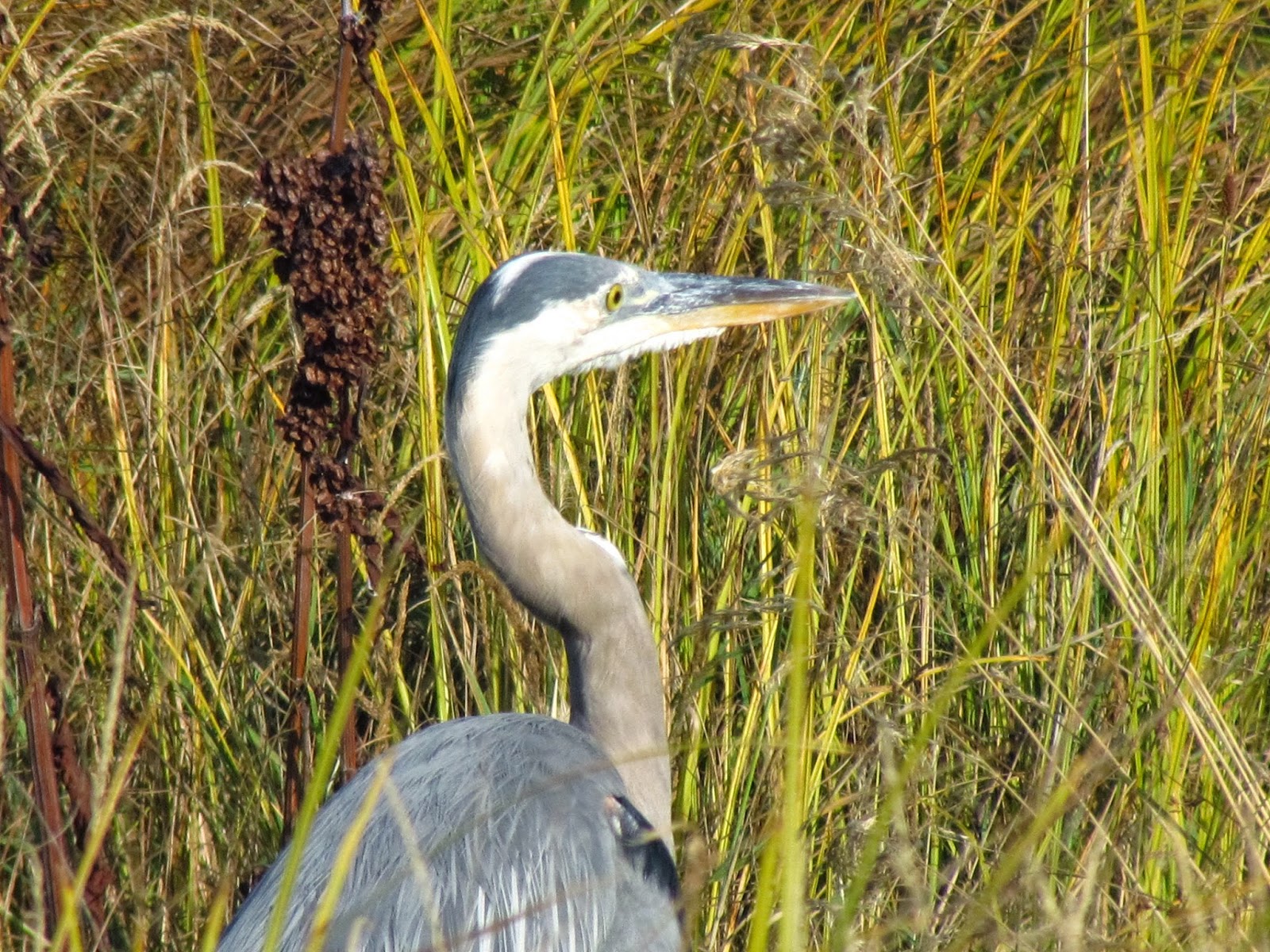 And in Birch Bay - a Great Blue Heron in the grasses by a slough.  It was a tie for top shot of the week.

All photos were taken with a CANON POWERSHOT SX30IS - on Landscaping setting, no editing was done except for a little cropping.  The light in the area where the heron photo was taken is almost magical, set up against some large trees with the ocean across the road from this area.  I always get fabulous photos in this area.

Weekly Top Shot
A Personal Photo Challenge - August
I'd Rather Be Birdin'
Posted by JoAnn ( Scene Through My Eyes) at 8:45 PM

I walked through the park in my old neighborhood where there is a small river and pond. I wish my old camera had not been lost because there was a beautiful Heron in the tree above the pond. It is easy to know there is something to look at because of the bird-photography fans with their telephoto lenses gathered along the edge. Winter in the tidal flats is our best time for plovers and sandpipers and other shore birds. Every now and then there will be something exotic in the mixed flock and I can add to my life list.

You are right about the "magic" of that lighting - very exotic! Beautiful color palette - it would be so soothing in a living room!

Good to see you again this month, JoAnn! These are fun shots and show how patience can pay off with wildlife photography. I especially like the circular swirls of the water in the first photo. They add to the composition. And you sure did get close to the heron!

Hi! Great photos! I have been out of touch with you for quite a while. Last year was a pretty rough year for me and I blogged off and on and there are still some people I haven't reconnected with. Hope you are doing well! Loved reading the book, and I sent it on to my Mom who I noticed has also become one of your followers. All my best!

Love the birds' shadows in the water, and that is one gorgeous heron pic JoAnn.
Good to see you here, and even better knowing you've been out enjoying the beauty of Nature - whilst I'm here stuck to a laptop, shame on me!

Beautiful bird photos! They are the hardest for me to get good photos of...these are wonderful!

You did a wonderful job with these bird photos. The light is very good and they are crystal clear. Did I miss the killdeer?

Extraordinary images....love the reflections too.
Thanks for leaving a link this weekend. Always appreciated by me and the other bird enthusiasts too.

Gorgeous shots, JoAnn! I especially love the detail on the sandpipers. Your patience was truly rewarded.

Great photos of shore birds. Love the sandpipers poking along the shore. I always think the herons look like rather curmudgeonly old folks, yet full of grace and patience.

Both great photos but I really like the first shot. Wonderful composition, and I love the ripples/circles in the water. I'd frame that one!

The sandpipers are cute and really like the ripples in teh water. Love the blue heron!

These are so beautiful! I love those sandpipers. You did great for the challenge! Hugs, Diane

I'm glad you were patient and waited to get these awesome photos.

Lovely birds! Patience pays off in most cases and this is one that it did.

Common sandpiper and grey herons are both birds we see a lot round here Joanne.
Lovely photographs.

Beautiful! The sandpipers seem to be very content hunting their dinner by the shore, I love the concentric rings radiating out around them and the crisp reflections in the water. I am going to have to look into upgrading my camera (and learn how to take a beautiful photograph too). I would love to be able to get some good pictures of the birds along the shoreline here in Ohio. We have the Great Blue Herons nesting close to our house. Early in the morning the adults will fly right over the house. My husband calls them pterodactyls They really do look huge.

JOAnn, such great shots. The reflections of the sandpipers are wonderful. But, you always have such outstanding photos..Happy Wednesday..Judy