Vacation and a Very Old Ship

We spent a lot of time on the deck at the cabin at Fidalgo Bay Resort (read older posts if you need to catch up on our vacation adventures).  So the second day there we decided to head out and have more adventures in Ancortes.  There sure are a lot of things to see and do there.  It is a lovely seaside town, with a gorgeous area of old homes - there is even a stone castle there.  This time we were headed to Washington Park - again - we just love it there.

I had seen this very old ship for years - but never had a chance to get photos of it - it is not in a good location for photos.  I was determined this time.  I figured out on mapquest how to get down to the bay where we might get a better shot of it.  A small, one block long street that turns a corner and becomes a narrow gravel pathway - just big enough for a car took us down there. 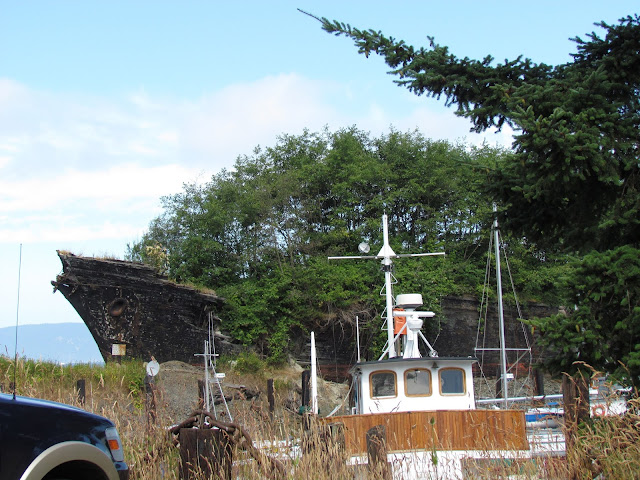 We drove down along bumpy dirt roads - past all sorts of Marine Ways "stuff" - rusted metal - boats and barges pulled up on the ways - I didn't want to stop and take photos because I didn't want to get stopped and sent out.  We passed through gates that said "No Admittance" or "Keep Out"  or "Stop!!".  I am not usually that brave - I will turn and run at the first sign telling me to get out but I really wanted to get some pictures of this old wooden ship.  And there it was - the bow poking out behind some much smaller boats int the boat yard. 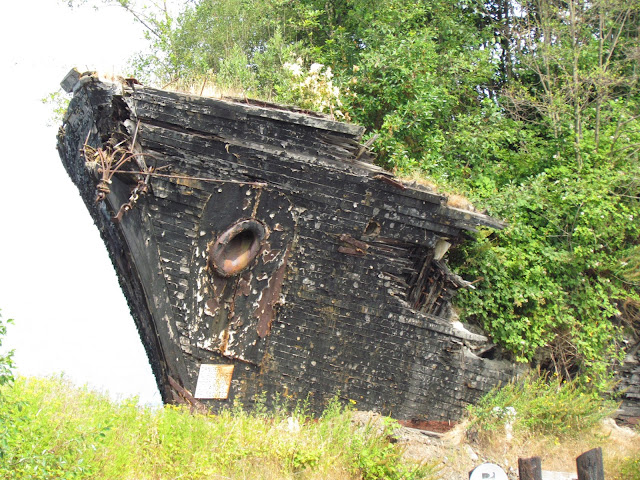 It has been there so long that the area around it, where there had once been water, had been filled in - and trees has sprouted and grown out of the hull 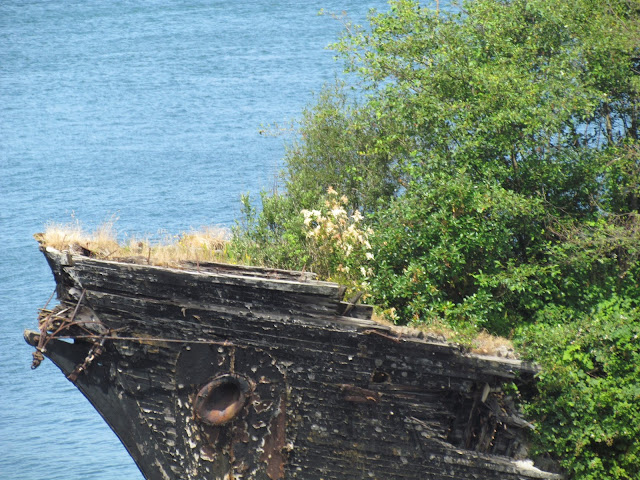 The bow even has Goat's Beard bushes growing on it - they will grow just about anyplace. 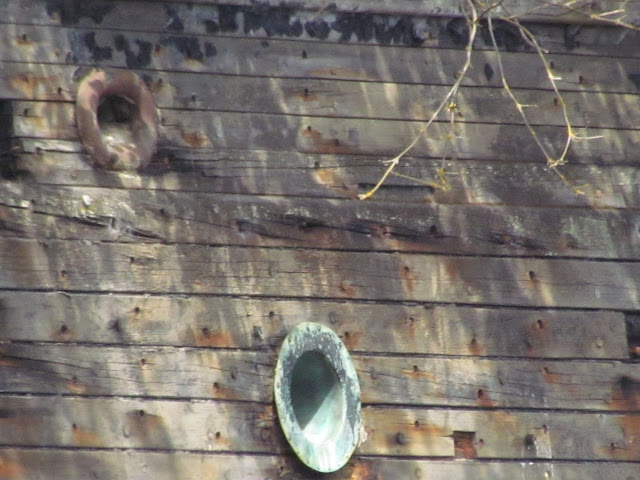 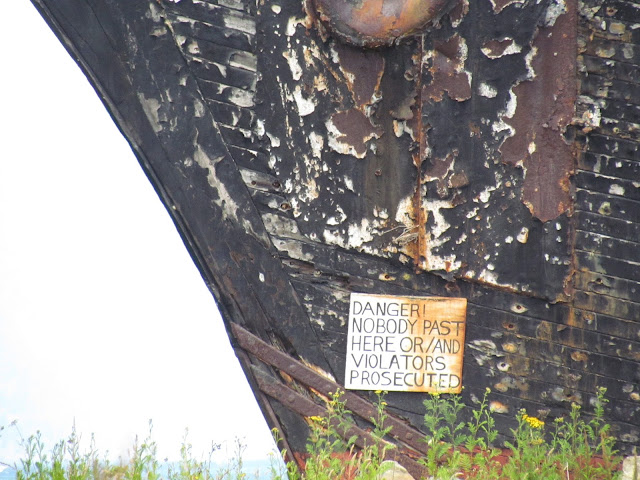 Love the sign - a little on the confusing side - but clearly - Do NOT go past this boat. 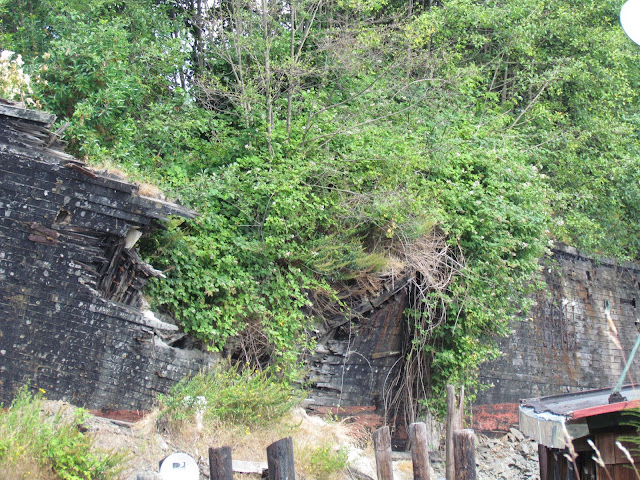 We found a paved driveway going up a hill, back to the street and drove part way up so I could get this shot. 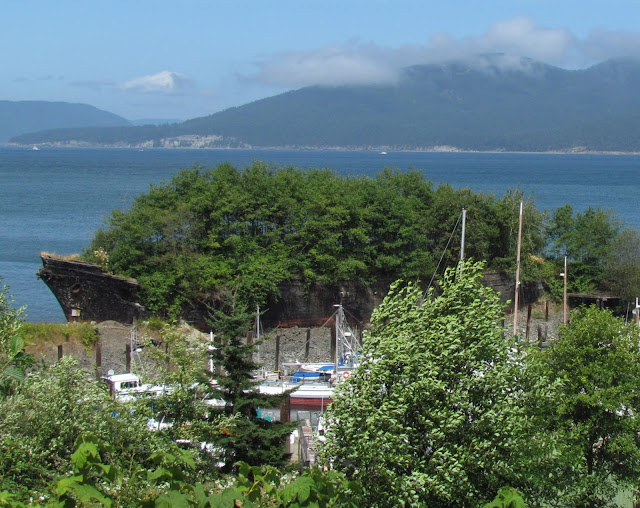 Once back at street level, Don waited until there was no traffic coming for a long distance back, and pulled back up onto the street and off to the side  so I could get some full view shots of the ship. 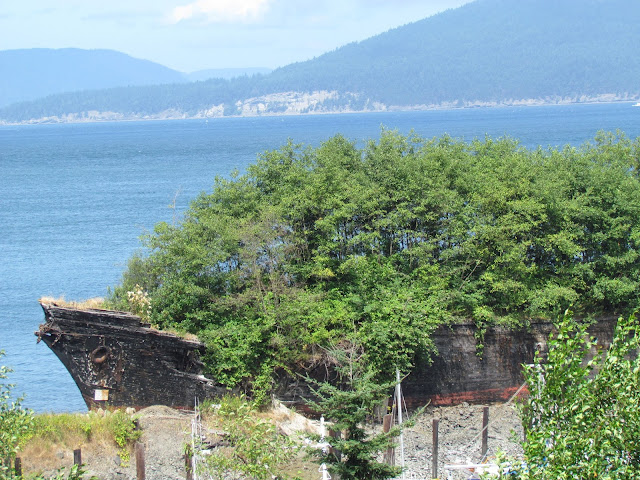 The boat is "La Merced" -  a 232 foot long, four masted old cod schooner  that  was placed here as a breakwater for this  marina.

"La Merced is one of only four extant four-masted schooner hulls in the US. She was originally built in 1917 during WWI and used by Standard Oil in the international petroleum trade until 1919, when she was sold to W.S. Scammell of Port Townsend. Under his ownership she continued in the petroleum trade, traveling between Seattle or Astoria, OR and San Pedro, Melbourne, Sydney, Honolulu, and the Solomon Islands. In 1926 she was sold to a group of investors from Seattle and towed to Alaska for service as a floating cannery in  Kupreanof Harbor, Alaska, in the Aleutian Islands. She was sold again in 1965 and the new owners scrapped her machinery."

It was placed on the National Registry of Historic Places in 1988. 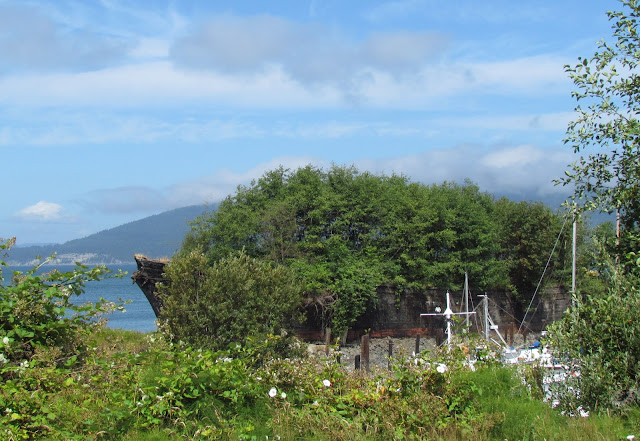 The ship was placed as a breakwater in 1966 and filled with dredge to stabilize it. 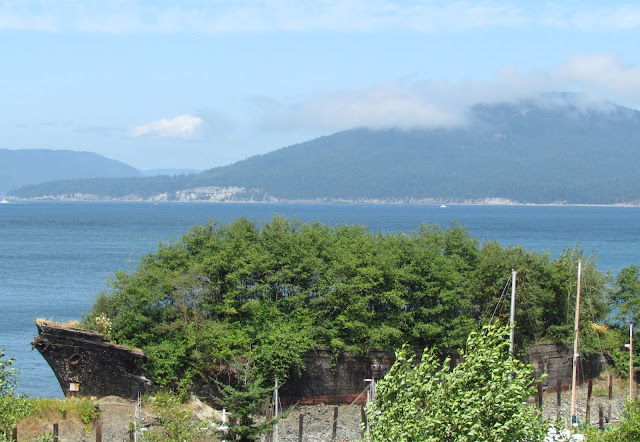 It is an amazing sight, to see such a huge boat filled with trees that have been growing for almost 50 years. 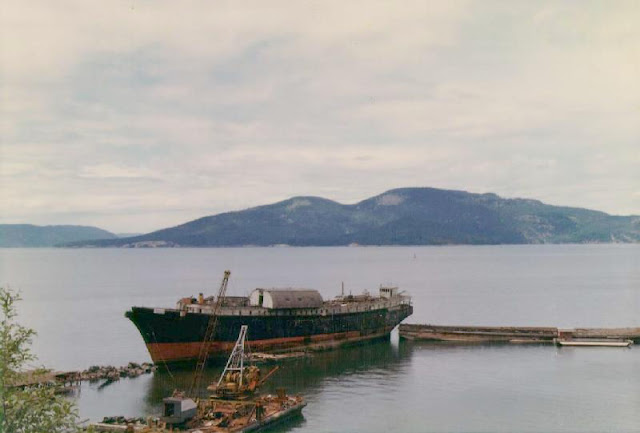 An internet photo showng "La Merced" when first placed here as a breakwater - the mountains are the same in the background - the boat has certainly changed.  It would have been interesting if someone had taken photographs all during this time - to document the changes. 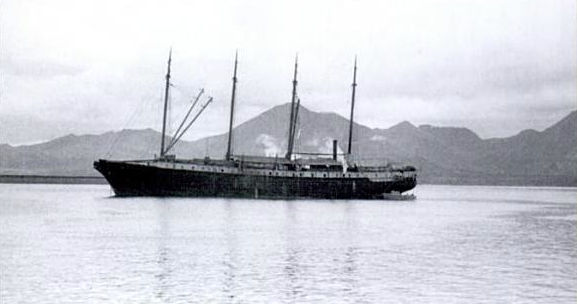 "La Merced" was converted to diesel and the masts removed in the 1940s.  She served the Everett, WA  Alaskan fishing fleet as a floating cannery for years in Alaska, and as a cod schooner. 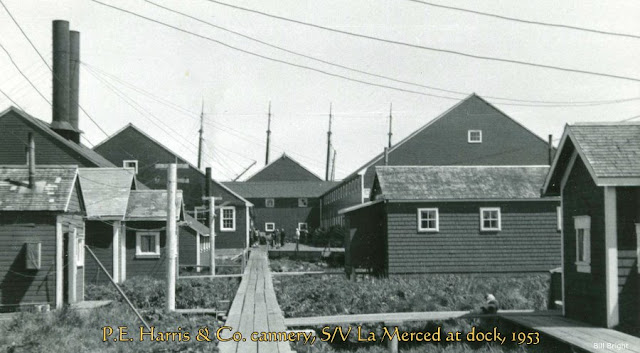 Cannery view in Alaska, with "La Merced", the converted sailing vessel, tied up at the main dock in the background showing its tall masts still attached.

What an interesting day we had.

I agree! That's quite a story and amazing shots. I hate to see ships die a slow, sad death like that. But they take a lot to maintain and - like us - after a certain age it seems like everything starts to go.

Such an interesting story about this old ship! I love that her final resting place is doing some good, protecting the marina. It looks like something out of an old pirate's tale now, but she once looked like a fine and hard working ship. I can see how this old ship might be attractive to children, so it is a good thing that it is difficult to access. Thanks for sharing this old girl's story. xoxo

What a great story. She was a fantastic ship in her day. Kind of sad to see what has become of her. But I guess she is still useful. I must try to see her the next time I am in Anacortes. Your photos are amazing.

Thanks for researching the history. She seems to be doing a pretty good job of holding back the sea.

Interesting history on what looks like an abandoned boat. It is unfortunate someone didn't take pictures to record the changes of it as the years have passed by. Thanks for the history lesson.

interesting story. Never heard about a ship places as breakwater on purpose. Thanks for sharing.

Your persistence paid off! Such a great account of a local point of interest. Any idea of how the ship got this unusual name? Really fine photography both long views and macro.

Great shots, and what an interesting story! I really enjoyed this post. For years I've wanted to visit Anacortes - so easy with the ferry from Sidney. This just makes me want to get there more.

I just love the way that ship has gone back to nature JoAnne - and you took some excellent photographs of it too.

That is one amazing sight...and one would think it was hundreds of years no just 50!